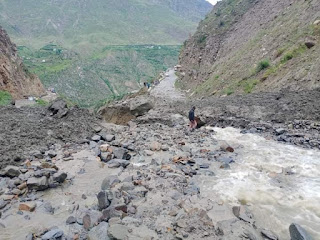 The incident took place at Udaipur in Lahaul at Last night, Deputy Commissioner of Lahaul Spiti Neeraj Kumar said.Two tents of labourers and a private JCB have been washed away, he said, adding that four personnel of the Border Roads Organisation and General Reserve Engineer Force (BRO-GREF), two labourers engaged by a private telecom company and four travellers headed for Killar in Pangi were missing.

A 19-year-old labourer, Mohammad Altaaf, was injured while around 10 people are reported missing. Altaaf, a resident of Jammu and Kashmir, has been referred to a nearby hospital. "We have requisitioned a unit of the National Disaster Response Force (NDRF) which is on its way," the DC said. Several roads in the high-altitude tribal district are blocked due to landslides.

In Chamba, a JCB helper was swept away in a flash flood triggered by heavy rain at Chaned on the Chamba-Pathankot highway. Rescuers of the state police and home guards are searching for the missing.

A 25-year-old woman, Poonam Negi, and her four-year-old son, Nikunj, went missing after being swept away in the Brahmaganga rivulet, a tributary of the Parvati river in Kullu district.  Officials said they were passing by the rivulet when the water level suddenly rose.

The Shimla Meteorological Centre has advised people not to go near rivers and other water bodies in the hill state over the next few days in order to avoid any unfortunate incidents. The meteorological centre also warned of flash floods, landslides and uprooting of trees due to heavy rains over the next three days.