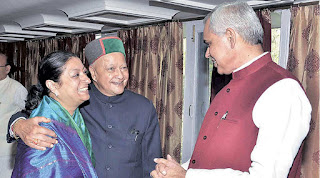 Asha Kuamri
Raja Virbhadra Singh a towering legend of Himachal politics passed away  Thursday morning at 3.40am. The very name of Raja Sahib brought a smile on the faces of lakhs of people. He was admired, adored and people were awestruck in his presence.
An able administrator, a shrewd politician, a doting father and above all a good human being.   I knew him from the day I was born. Growing up in a large almost joint family in my maternal grandparent's house on Aurangzeb Road in Delhi, along with my cousins we also used to call him Papa, although he was my 'Mausa' as he was married to my mother's younger sister. So loving, so caring I remember the umpteen number of times he used to drive and take us ie all the children to India Gate for ice cream in his Dodge car.
Growing up he encouraged us all to study and also taught us the value of reading books and becoming self reliant. His eldest daughter, my cousin, my best friend Abhilasha and I spent hours learning from him, especially at 23 Ferozeshah Road, his official residence at Delhi as an MP. I even learnt to type on his personal typewriter!

I cannot express my grief in words. I lost my biological father 20 years ago and my mother last year but today I am truly feeling orphaned. He was such a wonderful person. So learned so kind so encouraging so helpful.

His smile was so radiant and a hallmark of his personality. A highly developed sense of humour and a very sensitive nature. Words escape me as I try to remember thousands of facets of his personality! He encouraged Abhilasha and me to try our hand at cooking and sometimes the stuff we made was terribly in edible but he would consume it with a smile and gently tell us to try and improve so that we all did not get food poisoning!!

When I became an MLA I did not know how to address him in public as I had always called him Papa! We had a discussion on the issue and it was mutually decided that I would address him as Sir in public however as his minister we used to get into heated discussions on departmental issues and I would totally forget to call him Sir and would call him Papa no matter who was present.

A development-oriented CM his vision for Himachal was remarkable. I remember when I was the minister for primary education he called me and said he wanted an accessible school for every Himachali and even if there was one student in remote areas we must open a GPS!

He did so much for Himachal but wanted to do more and more. Sometimes he used to get frustrated when there was a shortage of funds in the state treasury and he wanted to expand the infrastructure of the state. Although he was a political person he was more bureaucrat than any bureaucrat  I have ever known. He had an uncanny ability to resolve matters of finance.

Himachal Pradesh lived in his heart and 'Raja Sahib' used the strength, trust, faith and support  he received from the masses, to build Himachal Pradesh –a state of which he will be called a modern architect, protection of environment, culture and traditions