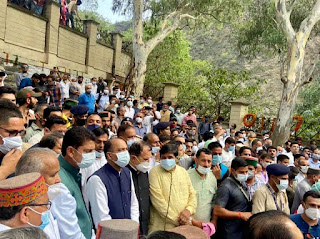 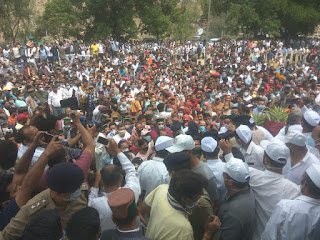 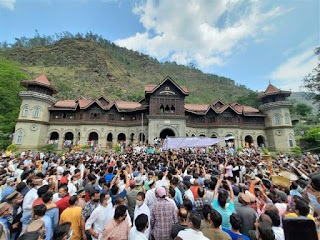 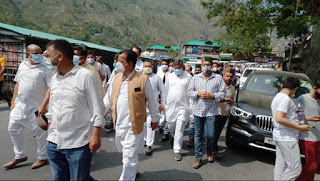 At last it was a tearful adieu to the 'massiha 'of the masses, Virbhadhra Singh, popularly know as Raja Sahib by the people of Himachal Pradesh. His mortal remains were consigned to flames on the bank of Satluj in Rampur, 120 kms from Shimla, his home town with full State honour.

His son, Vikrmaditya, who is also MLA from Shimla Rural Assembly Constituency l lit the pyre. Virbhadhra Singh political life span over 60 years, He remained Chief Minister of the State for six time and Member of the Union Council of Ministerts for three time.

He had worked with all the Prime Ministers hailing from the Congress Party, starting from late. Pt.Jawahar Lal Nehre. The funeral procession started from the Padam place in the afternoon in which thousands of his well wishers participated and chanted the slogans , " Jab tak Suraj Chand rehega – Virbhadr tere Naam rahega", "Virbhadar amar rahe, amar rahe."The funeral place which is spread on a large chunk of land on the bank of Satluj was not only packed to the capacity but over crowded. People in large number had started assembling in the complex of Padam palacesince early morning today to pay their last respect to their beloved leader. Those who had come yesterday evening remained waiting there throughout the night to join the "Antim Yatra" of their leader Padam Palace complex which has capacity to accommodate more than 50,000 persons was full to the capacity by 10 am.

Besides people also assembled on roads and various places in the town to bid farewell to their leader. People in large number from various parts of the State and even from outside the State, made it a point to reach Rampur to attend the funeral.

I have never seen such a adieu neither in person

nor on media during my life time. . One similar to this was of late Dr.Y.S. Parmar, who was the first Chief Minister of the State also known as 'Himachal Nirmata', His funeral procession had started from the Root, private l residence towards Sanjauli where funeral had taken place..There also people had assembled in large number and the road from Root to Sanjuali was over crowded . I do remembers the words the then Director of Public Relations, late H.K. Mitoo, who was doing the running commentary He had said , "Mein root se bol raha hoon, dosto aaj himachal Pradesh ki roots hil gayee heiy." . From the last three days the crowd of people in Shimla, enroot Shimla to Rampur and lastly in Rampur, one can easily understand that in the death of Virbhqdra Singh , "Himachal Pradeh ka baur briksh deh gaya heiy. A big lost to the State. The State had lost the legendary, statesman and a politician of stature and above all benefactor and well wishers of the people. Of the State. The void created by his death will be difficult to fill in.

What stature Virbhadra Singh carried can be gauged from this. The leading newspapers had dedicated pages for giving tributes and leading articles on Virbhadra Singh besides carrying editorials. The electronic media has been doing coverage continuously for the last three days. I have never seen it before .It shows how popular and devoted leader he was. The State had lost a true son and Congress party a tall leader. On his contributions to the State and public welfare will be discussed on some other day. Today it is time to say him Good bye and pray God for the eternal peace of the departed soul. Om Shanti.