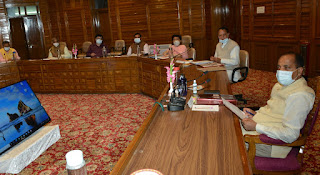 Shimla           The meeting of the State Cabinet held here today under the chairmanship of Chief Minister Jai Ram Thakur decided to open schools for 10th, 11th and 12th classes with effect from 2 August, 2021 by strictly following the SoPs.

The residential and partially residential schools would also open for these classes by following the SoPs. The research scholars in Universities would be allowed as per the dates to be notified by the Universities authorities.

It decided that the students of 5th and 8th classes would be allowed to visit schools for doubt clearances with effect from 2 August, 2021.

It also decided that the coaching, tuition and training institutions would also be allowed to function with effect from 26 July this year by following SoPs.

The Cabinet decided to open three Sub-Divisional Offices (Civil) at Nirmand in Kullu district and at Jubbal and at Kotkhai in Shimla district to facilitate the people of these areas.

The Cabinet approved to fill up 100 posts of Junior Office Assistant (IT) in H.P. Secretariat through direct recruitment.

The Cabinet gave its consent to convert Industrial Training Institute for women, Bharari in Bilaspur district to Co-Educational Industrial Training Institution and also convert the two trades viz. Surveyor and Office Assistant-cum- Computer Operator into Mechanic Motor Vehicle and Fitter alongwith posts since this institution is running in private accommodation. Therefore, the converted trades would be started once the institution is shifted to its own building.

It gave its nod to fill up three additional posts in newly upgraded Community Health Centre Garh Jamula in Kangra district for its functioning.

The Cabinet decided to fill up three posts of drivers in Information and Public Relations on daily wage basis.

It also decided to fill up five posts of Chowkidars on daily wage basis in Food, Civil Supplies and Consumer Affairs Department.

The presentations were also made before the Cabinet on Covid-19 situation in the State and preparedness to tackle possible third wave of corona and on Board Results, UGC guidelines and opening of education institutions.