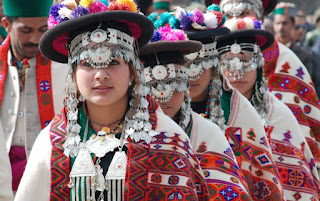 SHIMLA-----Working on its determination towards equitable and balanced development of the tribal areas and welfare of tribal people of Himachal Pradesh, the state government has taken many initiatives which have ensured development of these areas at a rapid pace.
The population of the tribal community in the state is 5.71 percent of the total population and for the social and economic upliftment of this community, 9 percent of the total state plan amount has been earmarked under the Tribal Area Development Programme. The size of the Tribal Area Development Programme was increased to Rs. 567 crores in the year 2018-19, Rs. 639 crores in 2019-20 and Rs 711 crores in the year 2020-21. For the year 2021-22, the government has made a provision of Rs.846.49 crores.
Under the Border Area Development Scheme, in the year 2018-19, Rs. 25.95 crores were provided as central share and Rs. 2.88 crores as state share. In the year 2019-20 Rs 27.50 crores were provided as central and Rs. 3.05 crores as state share. For the year 2021-22, a provision of Rs 25 crores has been made as central share and Rs 2.78 crores as state share.
Under the Tribal Area Development Programme, Rs. 127.69 crores were spent on transport, roads and bridges and construction of buildings during the year 2018-19, Rs. 147.33 crores in 2019-20, Rs. 195.90 crores during 2020-21 while in the year 2021-22 a budgetary provision of Rs 244.06 crores has been made for this.
Under the provisions of 20 Point Programme, 8669 targets were achieved against 7095 targets set in the year 2018-19 while 7509 targets were achieved against 6829 targets set for the year 2020-21.
During the year 2018-19, it was decided to provide telemedicine facility in the tribal areas of Pangi and Bharmour, under which a provision of Rs. 200 lakh was made in the year 2018-19, Rs.174 lakh in 2019-20 and Rs.193 lakh in 2020-21.  Now, Rs. 84 lakh are being proposed in the year 2021-22.
The Government of India gave approval to open three new Eklavya Model Residential Schools at Bharmour, Pangi and Lahaul during the year 2018-19, which have been started from the academic session 2019-20. So far, an amount of Rs. 32 crores has been received from the central government for the construction of these residential schools. At present, four Eklavya Adarsh Residential Schools are functional in the state in which 554 scheduled tribe students are studying.
A State Level Monitoring Committee has been constituted under the chairmanship of the Chief Secretary for speedy implementation of the Scheduled Tribes and Other Traditional Forest Dwellers (Recognition of Forest Rights) Act, 2006 in tribal areas and non-tribal areas. After the Panchayat elections in the state, the process of formation of district and sub-division level committees is in progress. So far, five district level and 35 sub-divisional level committees have been constituted. In addition, 17,503 Forest Rights Committees have been constituted at the village level.
So far, community forest officers have been identified on 1918.9369 hectares of forest land and individual rights over 2.4129 hectares of forest land have been identified and vested in the state. Rohtang Atal Tunnel has been dedicated to the nation which is proving to be a boon for the people of tribal areas of Lahaul and Pangi but also tourism development has also got a new dimension in the state.
The first basic ice hockey training was successfully organized at Spiti (Kaza) at an altitude of 12040 feet above sea level by the Department of Youth Services and Sports and the Laddakh Women's Ice Hockey Foundation.
-0-