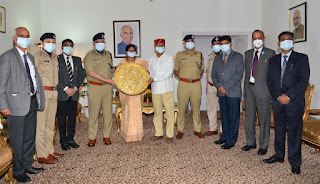 Director General of Police Sanjay Kundu alongwith other senior officers of the department called on Governor Rajendra Vishvanath Arlekar at Raj Bhavan today. They welcomed the Governor and Lady Governor Anagha Arlekar in Himachal Pradesh and presented a memento to them.

On the occasion, the DGP briefed about the activities and achievements of the State Police. He apprised the Governor about the active participation of Himachal Police in Indo-China border issue and said that the state has around 240 kilometer border with China including 160 km in Kinnaur and 80 km in Spiti and around 48 villages were in these border areas. He added that as per the direction of former Governor, a team of senior police officers went there and prepared a report which was appreciated at all level. He also briefed about the role of police in controlling drugs and illicit trafficking and in women and child safety. He said that they have taken various initiatives in this direction to check them.

"We take the lead in these issues and we are not in the news for wrong reasons", said DGP.

The Governor appreciated all efforts of the police department and hoped that they could be a model police in the country. He stressed on making the police more public friendly.  He said that people should have a good perception of police.  He said that the common citizens should be aware about the facilities being provided by the police in cases related to drugs, crimes against women etc.  He appreciated the initiative of Police to attach the property of people doing illegal drug acts.

On the occasion, Lady Governor Anagha Arlekar also appreciated the work done by the state police in the field of cyber crime.