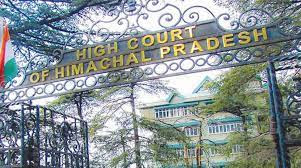 SHIMLA------The High Court of H.P. today issued notice to the Centre and State Government and the Chairman and Project Director of National Highways Authority of India, in the matter related to collection of toll fee at Toll Plaza Sanwara, District Solan. The Court also stayed the collection of toll tax at the Sanwara Toll Plaza till next date of hearing, i.e. 2.6.2021.

A Division Bench comprising Chief Justice L.Narayana Swamy and Justice Anoop Chitkara passed these orders on a public interest litigation filed by one Sh.Adit Singal, who has alleged that the establishment of the Toll Plaza at Sanwara is illegal and contrary to the Rules of National Highway Fee(Determination of Rates and Collection)Rules, 2008. He has alleged that as per rules no toll plaza can be established in the same section within a distance of 60 kms, whereas another Toll Plazas are situated in Chandimandir, District Panchkula and at Parwanoo in District Solan within 60 kilometers from the Sanwara Toll Plaza. He has also alleged that the completion certificate stating completion of 95 percent work by M/s G. R Infraprojects has wrongly and arbitrarily been issued to it by the National Highways Authority of India. He has alleged that the toll is being levied before completion of construction work and major part of the construction work of flyover and its under pass at Kumarhatti, Saproon and Timber Trail Resort at Parwanoo are not complete and will take months or may be a year or more to be completed and as such it cannot be said that 95 percent work has been completed. He has alleged that the public is compelled to pay toll for incomplete facilities that too at exorbitant rates. He has also alleged that the toll road has not been maintained properly and part of the stretch is accident prone, as there is no proper barricading of the roads which join the toll road from the towns and villages along the National highway. The petitioner has prayed to issue directions to forbear the respondents from collecting toll fee at its toll plaza at Sanwara. He has also prayed to quash the contract, construction, completion certificate issued to M/GR Infraprojects by the National Authority of India and also to quash the notification fixing the toll charges payable by the vehicles crossing the Sanwara toll plaza.