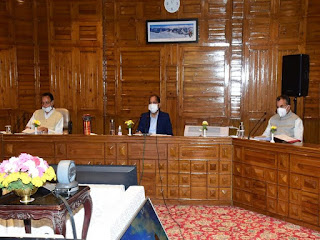 SHIMLA---The meeting of State Cabinet held here today under the chairmanship of Chief Minister Jai Ram Thakur reviewed the Covid-19 situation in the State. Thus, in order to break the virus chain, the Cabinet decided to further extend the Corona Curfew in the whole State till 31st May, 2021 with same restrictions. It was decided that Department of Health would encourage private hospitals in the State to increase vaccination in their institutions. It was felt that MLAs may review along with concerned SDM the welfare/ treatment being provided to Covid patients in home isolation.

Considering the present situation arising out of Covid, the excise year 2020-21 has been extended by one-month up to 30th  June 2021. The new excise policy will be operational for 9 months i.e. 1st July 2021 to 31st March 2022.  Approval was also given for the renewal of retail excise vends in the state for the year 2021-22 for the renewal fees of 3 per cent of the value of unit/vend with an objective to gain adequate enhancement in government revenue, reduction in the price of liquor and to curb its smuggling from the neighbouring states. According to the New Policy, low-price brands of IMFL will be cheaper as license fees and excise duty have been reduced, facility of transfer of quota within district and inter-district has been approved. The new excise policy also allows 15 percent of country liquor quota for liquor manufacturers and bottlers to be supplied to the retail licensees. The balance 85 per cent quota can be lifted by the retail licensees from the suppliers of their choice. This was earlier 30 per cent. It envisages the increase in license fees by 5 per cent and quota by 3 per cent. New license for serving of liquor in tented accommodation has been approved and new licenses for visitor centre in wine manufacturing units and wine tasting festivals has been approved. Similarly, new License in form D-2E has been approved for production of ethanol for the purpose of exclusive supply to petroleum companies, sale of certain high-end brands of liquor in departmental store through license in form L-10BB has been approved subject to certain terms and conditions and liquor quota of bars attached to hotels has been reduced by 50 per cent. License fees for CSD canteens have been reduced and facility of liquor canteen license in L-9 & L-9A has been allowed to all the Central Armed Police Forces.

Cabinet has approved in principle to have Excise Police in the Excise and Taxation Department to check the inter-state and intra-state smuggling of liquor, illicit trade and bootlegging of liquor leading to substantial loss of excise revenue to the government exchequer. The price of adding a sub vend has been significantly reduced and penalty on unlifted quota has been rationalised, whereas breakage for wholesaler for storage and transport has been increased from 0.5% to 0.6%. It is hoped that this policy has taken into account all stakeholders which include government, consumers, retailers, wholesalers, bottling plants, distilleries and hotels and bars. All sections were engaged by the department in taking feedback based on which these decisions have been undertaken.

The Cabinet also decided to extend the current year Toll Leases by one month upto 30th June, 2021 which subsequently would be auctioned. The Leases for the year 2021-22 would be operational from 1st July, 2021 to 31st March, 2022.

The Cabinet approved new scheme for implementation of Project on Fodder Development as per the announcement of the Chief Minister in the budget- 2021-22. The project envisages propagation of planting stock of perennial high yielding grass species, fodder trees and their further dissemination on farmer's fields as well as gausadans in the state.

The Cabinet also approved 33 posts of different categories, 11 each in newly created Municipal Corporations, Mandi, Solan and Palampur for smooth functioning of these Corporations.

The Cabinet gave its consent to fill up 20 posts of Drivers in Agriculture Department for its smooth functioning.

It gave its consent to provide approval in favour of M/s  R.K.V. Spirit Private Limited Kala Amb, Tehsil Nalagarh in district Solan for setting up distillery, Brewery and Ethanol Plant based on extra neutral Alcohol (Liquor).

It decided to open a new Government Pharmacy College in Sulah Vidhan Sabha area of Kangra district alongwith creation of requisite posts to man this college.

It also gave its consent   to create and fill up one post of Assistant Professor in Rheumatology Cell in Department of General Medicine in IGMC, Shimla.

It gave its permission to fill up five vacant posts of Professors, Assistant Professors and Associate Professor in Department of Nephrology in IGMC Shimla and Dr. Rajendra Prasad Government Medical College Tanda to benefit the patients.

The Cabinet accorded its approval to procure CT Scan 128 Slice machine at cost of Rs.4.28 crore for Dr. Rajendra Prasad Medical College, Tanda in district Kangra to facilitate the patients of the area.

It also decided to enhance the number of doctors in Civil Hospital Dehra in Kangra district from existing 9 to 14 by creating five new posts to benefit the people of this area.

The Cabinet decided to upgrade Community Health Centre Dharampur in Solan district from six bedded to 50 bedded CHC to facilitate people of the area.

The Cabinet also accorded its nod to shift Health Sub Centre Tatapani in Mandi district to Sanwidhar Khanderi to facilitate the people of the area.