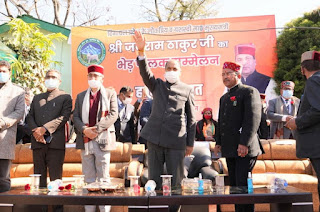 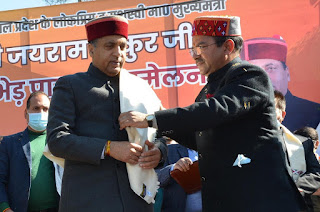 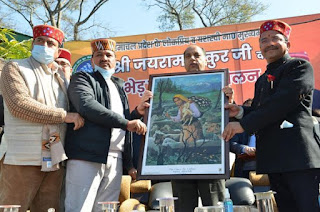 SHIMLA      The State Government was committed for welfare of the Gaddi community and would ensure initiating of new schemes for making sheep rearing more profitable avocation. This was stated by Chief Minister Jai Ram Thakur while addressing the Sheep Breeders Conference organized by H.P. Wool Federation at Banuri in Palampur area of Kangra district today after inaugurating  Tribal Community and Training Centre building constructed by spending an amount of Rs. one crore.

Chief Minister said that it was in the year 2000 during the tenure of the BJP Government at the Centre as well as in the State, when the Gaddi community was accorded tribal status. He said that the State Government has directed Deputy Commissioners and Superintendents of Police to ensure strict action against the offenders involved in theft of sheep and goats of the Gaddi people. He said that Gaddi would be provided Rams of good breed so as to get high quality wool.

Chief Minister said that the present State Government during the last three years has initiated several welfare schemes for upliftment of the poor and downtrodden. He said the Himachal Grihini Suvidha Yojna has been launched to provide free gas connections to the households devoid of the same. He said that as many as 2.90 lakh free gas connections under this scheme have been provided, thereby making Himachal Pradesh a Smoke Free State of the country.

Jai Ram Thakur said that the Union Government has started Ayushmaan Bharat Yojna to provide health cover of Rs 5 lakh to every family. He said that to cover the families left out from Ayushmaan Bharat Yojna, the State Government started HIMCARE scheme. He said that till date as many as 1.50 lakh families have derived benefit of this scheme and an amount of Rs. 150 crore have been spent on this. He said the State Government has also started Sahara Yojana, under which the families with chronically ill patient were being provided financial assistance of Rs. 3000 per month. He said that as many as 15 thousand people have been benefitted under this scheme.

Chief Minister said that under the Mukhyamantri Swavalamban Yojna the State Government was providing a loan of Rs. 40 lakh to the youth to start self employment ventures. He said that 25 percent subsidy was being provided to the youth under this scheme, whereas women and girls were being provided 30 percent subsidy. He said that thousands of youth have come forward to avail the benefit of this scheme and have become job providers instead of job seekers.

Jai Ram Thakur said that the nation today was secure in the hands of Prime Minister Narendra Modi. He said the timely decisions taken by the Prime Minister has not only helped the nation in checking the Corona pandemic, but today India has started vaccination drive against this virus. He said that credit of this goes to the able national leadership and scientists of the country. He said that as many as 93,000 frontline warriors were being vaccinated in the first phase in the State.

Chief Minister said the BJP Government in the State, created three new Municipal Corporations viz Palampur, Solan and Mandi to ensure planned development of these bigger and fast emerging towns of the State. He said that all the genuine demands of Gaddi communities would be considered sympathetically.

Chairman Wool Fed Trilok Kapoor, welcomed the Chief Minister and said that being himself from humble background Chief Minister Jai Ram Thakur was aware of the developmental needs and aspirations of the weaker sections of the society. He said that sheep and goat rearing was integral part of rural economy.