CM calls upon by delegation of Woolfed 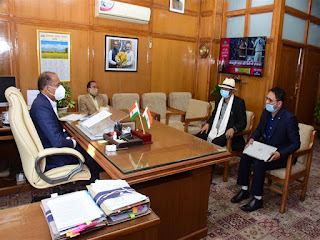 CM calls upon by delegation of Woolfed

A delegation led by Chairman Woolfed Trilok Kapoor called on the Chief Minister Jai Ram Thakur here today and apprised him about the Action Plan for Exports of Organic Produces with Polybionic Technology from the State.

Chief Minister said that in the present global scenario, the global food security was an opportunity for the State to establish a global network and trading platform for export of organic and natural resources of the State. He said that organic produces particularly wool, milk and meat if properly and aggressively marketed could go a long way in strengthening the economy of the farmers.

Chairman Woolfed Trilok Kapoor said that Action Plan for Exports of Organic Produces with Polybionic Technology, however, needs the establishment of a dedicated team. He said that the Woolfed was planning to organize a Global Village Festival for the farmers in the State.