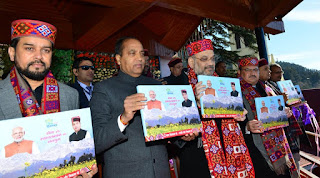 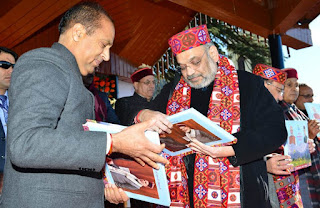 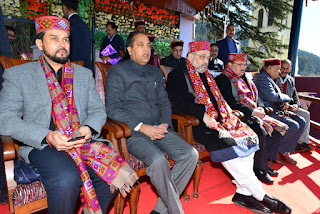 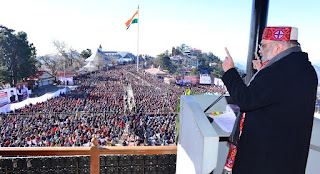 SHIMLA-----------Union Home Minister and National BJP President Amit Shah while addressing the massive gathering at historic Ridge here today on the occasion of completion of two years of present State Government said that the present State Government led by Chief Minister Jai Ram Thakur has ensured that Himachal Pradesh emerges as the role model for the other states of country in matter of development.

Amit Shah congratulated the Government and people of Himachal Pradesh for becoming the first State in the country where every household has a gas connection. He said that this step would go a long way in preserving the environment of the country.

Speaking on the occasion, National Working President of BJP  Jagat Prakash Nadda said that the Union Home Minister Amit Shah was instrumental in making the dream of crores of India true by abrogating   Article 370 in Jammu and Kashmir and also bringing several Acts and Laws to ensure safety and security of the Nation. The BJP Government in the State was ensuring balanced development of the State with special focus on those areas which have been neglected so far. He said that it was the then Union NDA Government which announced industrial package for Himachal Pradesh that paved way for industrial development in the State. He said that AIIMS and three medical colleges were sanctioned for State by Central BJP Government.

Speaking on the occasion, Chief Minister Jai Ram Thakur said that the two years of present State Government had been full of good governance, innovation, people's faith, progress and development. He said that the State Government from the day one of assuming office started working for development of every area of the State and welfare of every section of society. He said that victory of BJP in all four seats in general Lok Sabha elections by a record margin and thereafter in two assembly by-elections, vindicated the faith of people in policies and programmes of State Government.

Jai Ram Thakur said that he was thankful to Prime Minister Narendra Modi for his benevolence and love for the State and its people. He said that State Government in it very first decision reduced the age limit for receiving social security pension for senior citizens from 80 years to 70 year and now over 3.56 lakh citizens were being provided enhanced pension Rs. 1500 per month.

Jai Ram Thakur said that as many as 22 lakh people of the state were covered under Ayushman Bharat Yojna of Union Government. He said that the State Government  had also started  'Him Care' Scheme for those families not covered under Ayushman Bharat. He said that about 54,282 patients have availed the facility of 'Him Care' scheme and Rs. 51.33 crore had been spent on it till date.  He said that Rs. 2,000 per month were being provided under 'Sahara Yojna' to chronic patients of economically weaker sections of the society.

Chief Minister said that the State had been awarded as 'Best State' in a report of NITI Ayog for achievements under Sustainable Development Goals. He said that in addition to this, the State has been ranked as the 'Best State' in health and education sectors and second best State in overall performance in State of the States Survey.

Jai Ram Thakur said that 'Himachal Grihini Suvidha Yojana' was the major initiative taken by State Government under which more than 2.64 lakh families have been benefitted so far.

Chief Minister said that, due to the dynamic leadership of Prime Minister Narendra Modi, India was poised to emerge as the 'Super Power' of the World. Now Article 370 and 35 A have become history and India has 'One Constitution and One Symbol' in entire country. He also welcomed the decision of Supreme Court regarding Shri Ram Janambhumi. He said that Citizenship Amendment Act was an historic step taken by Union Government and people of the State support this decision as this would help in providing citizenship to the minorities of Pakistan, Bangladesh and Afghanistan.

Jai Ram Thakur said that with a view to make the state economically self-reliant and to create employment opportunities for youth within the State, 'Global Investors' Meet' was organized at Dharamshala. He said that as many as 2500 delegates including 250 delegates from 36 countries and eleven Ambassadors participated in the Meet which was graced by Prime Minister Narendra Modi. He said that State Government has signed 703 MoUs with an investment of Rs  96000 crore and today 'ground breaking ceremony' was being performed for projects over Rs 13,500 crore.

Union Minister of State for Finance and Corporate Affairs Anurag Thakur expressed hope that the State would scale new heights in the matter of development under the able leadership of Chief Minister Jai Ram Thakur. He appreciated the development and welfare oriented schemes initiated by the State Government for making Himachal Pradesh a Model State in terms of development. He congratulated the Chief Minister for successfully  organising 'Global Investors' Meet' at Dharamshala. He said that it was under the able leadership of Prime Minister Narendra Modi that India today  had 'One Constitution and One Nation' with abrogation of Article 370 from Jammu Kashmir.

Education Minister Suresh Bhardwaj while welcoming the Union Home Minister Amit Shah and other dignitaries thanked the Union Minister for sparing time from his busy schedule to preside over this two year celebrations of the State Government.

Documentary film of two years achievements of State Government produced by State Information and Public Relations Department was also screened on the occasion.

Speaker State Vidhan Sabha, Ministers, Deputy Speaker, Members of Parliament, MLAs, Chairmen and Vice Chairmen of various Boards and Corporations, Former MPs and MLAs, Mayor and Deputy Mayor Shimla Municipal Corporation, Political Advisor and OSD to the Chief Minister, Senior  Officers of the State Government and people of various parts of the State were present on the occasion.