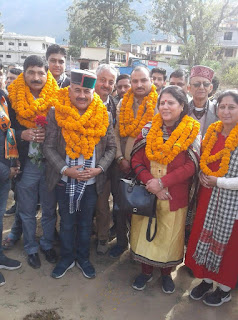 Vijyender Sharma
SHIMLA--------BJP district president Ravi Mehta on his visit to suni area under the assembly constituency of Shimla Rural.
After becoming the district president this is his maiden visit , BJP workers from Suni gave a rousing welcome on his arrival.
Addressing the program, District President Ravi Mehta said that the BJP is an ocean and to measure its depth you need to join the party. He said that I have the desire that suni become the power center of Shimla Rural.
He said that the Bharatiya Janata Party is a booth-level party and every booth will be strengthened on ground. In the coming times , 343 booths of Shimla district will be visited and after the process is over the executive body will be formed. He said that the responsibility will be given only to those who actively do thir work in the party. He said that the body will not be announced by sitting in the office, it will be announced only after seeing the performance of the worker.
He told that at every booth there will be a BJP team which will work actively and efficiently.
He told that the officials of the BJP district will constantly visit region like a wholetimer and work will be done with complete planning.