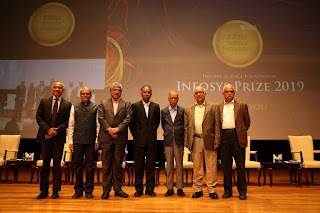 Mandi,November 07, 2019: Infosys Science Foundation (ISF) announced the winners of the Infosys Prize 2019 in six categories - Engineering and Computer Sciences, Humanities, Life Sciences, Mathematical Sciences, Physical Sciences and Social Sciences. The Prize celebrates the success of the recipients in science and research by recognizing their achievements in each category. The prize for each category comprises a pure gold medal, a citation and a prize purse of USD 100,000 (or its equivalent in Rupees) this year.

The Infosys Prize 2019 for Humanities is awarded to Manu V. Devadevan, Assistant Professor, School of Humanities and Social Sciences, Indian Institute of Technology, Mandi for his original and wide-ranging work on pre-modern South India. He critically reinterprets much of the conventional wisdom about the cultural, religious and social history of the Deccan and South India.Dr. Devadevan's primary research interests include political and economic processes in pre-modern South India, literary practices in South India and the study of ancient inscriptions from the region.

A  panel of accomplished jurors comprising renowned scholars and professors shortlisted the winners of Infosys Prize 2019 from 196 nominations. With a history of awarding some of the best talent, who have earned prestigious international honors like Fields Medal and the Nobel Memorial Prize more recently, the ISF believes that this year's winners too will leave an indelible impression in their domains.  The Infosys Prize not only recognizes these outstanding researchers and celebrates their achievements, but in doing so, creates role models who willencourage young minds to explore science as a career option.

S.D.Shibulal, Co-founder, Infosys Limited and President of the Infosys Science Foundation,said,"The Infosys Prize continues to recognize exemplary work in scientific research and enquiry. Many Infosys Prize laureates have gone on to contribute significantly in key areas like healthcare, genetics, climate science, astronomy and poverty alleviation, amongst other things. Their work has immediate implications for the human race and the planet. We hope it catalyzes social development."

Elaborating on the importance of Fundamental research at the event, N. R. Narayana Murthy, Founder – Infosys, Trustee – Infosys Science Foundation, said, "We should start helping our youngsters pursue fundamental research enthusiastically. They should be encouraged and equipped to become contributors to solving huge problems that confront us every day. I want India to be a place where discovery and invention happen every month."