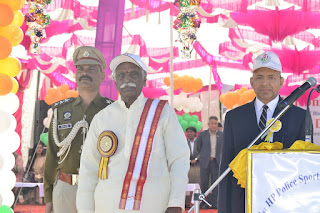 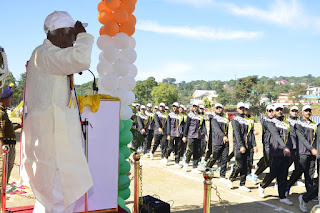 SHIMLA-----While inaugurating the 51th Himachal Pradesh Police Sports and Duty Meet at Police Ground in Dharamshala today, Governor Bandaru Dattatraya stressed upon the police personnel to help in making drug free society so that life and future of young generation could be saved. It was a menace which not only destroyed the life of individual but also the whole family, he added. He lauded the efforts of Police Department working in this direction and added that effective steps should be taken so that strong message should flow among drug peddlers.

He said that police personnel were working hard to maintain law and order and such events not only provide them an opportunity for recreation but also a platform to exhibit their talent and such events help in personality development along with instilling the spirit of discipline and teamwork in them. He said that sports not only make a person physically fit, but also help in inculcating spirit of competition, practice, self-confidence and team spirit. He said that such event could be helpful in releasing mental stress and physical pressure in day-to-day work.

He appreciated the efforts of Police administration for taking initiative in organizing sports meet.

As many as 500 athletes from three zones including Northern, Central and Southern Zones and one central unit will be participating during the three day event. It is for the first time that women police are participating in the sports meet.

Earlier, Shyam Bhagat Negi, ADGP, Law and Order welcomed the Governor and detailed about various events to be organized during the three day Police meet.

A cultural programme and a small skit on drugs were also performed by the contingents of police on the occasion.