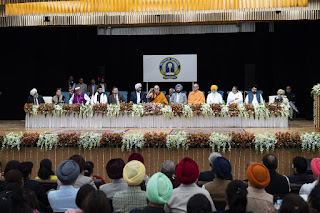 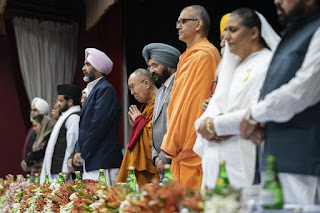 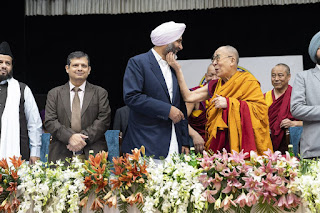 Dalai Lama iterated that all human beings are same mentally, emotionally and physically thus highlighting the importance of developing the spirit of oneness.

"We were born the same way but gradually we make lot of distinction including within the faiths which creates strong feeling of we and they. Basically we are same but we emphasis too much on the second level of differences and there are Killings and wars based on the concept of we and they. Religious faith is also causing difficulties and killing. At this very moment where we enjoy peace and tranquillity, at the same moment  and on this same earth at some places including some middle east countries there are killings and war going on. All these problems are our own creation."

Dalai Lama said "According to some scientists, basic human nature is compassionate because we are social animals. Individual survival is dependent on community without which one cannot survive. Very basis of our existence and our survival depends on the community. Today's world from east to west, north to south, Entire world is one human community. So now we need sense of oneness of seven billion human being. So therefore I am fully committed to promote sense of oneness of 7 billion human being,"

Dalai Lama noted that we are all social animal who have the seed of compassion within and said that the mistake lies in the existing modern education system which is introduced by the britishers. In the west where mainly theistic religion is followed, they believe in God where there is no tradition of training of mind.

Hailing the concept of Ahimsa and Karuna of India,  Dalai Lama expressed the need of combining the modern education with Shamatha, Ancient Indian Tradition about training of mind and Karuna, warmheartedness with human intelligence in order to develop inner strength and inner peace.

Dalai Lama added that peace should be developed at the individual level so to be able to share with others and not to only think about money as you will be able share only money with other people.

"India's tradition of Ahimsa and Karuna is very relevant which is the means to promote the basic human values for warm-heartness and that too through secular way". His Holiness informed the need of hygiene of emotion with the hygiene of physical that is provided in the schools,Dalai Lama added.