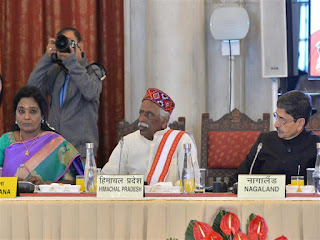 SHIMLA----- Governor Bandaru Dattatraya has emphasized the need to launch a strong campaign against social evils with the participation of every section of the society. He said that youth and NGOs should be involved actively in mass awareness campaigns like drug addiction, cleanliness, etc so that it could be made more effective.

He was participating in two-day Governor's Conference organised at Rashtrapati Bhawan in New Delhi, today.

Shri Dattatraya said that Himachal has progressed in a right direction despite tough topographical conditions and lack of economic resources and the people of the state are innocent, peace-loving and hardworking.  Due to their progressive nature, the State has been rewarded at the national level from time to time.

While elaborating the priorities of Himachal Pradesh, the Governor said that after having interaction with senior officers, NGOs working in the social sector and various organizations, the focus has been given to drug de-addiction, cleanliness, protection of cultural heritage, environment, tourism and skill development, quality education, health sector and organic farming.

Shri Dattatraya said that during his short term of two months in the state, he tried to give direction to the innovation and society by targeting various issues of social concern. He would provide momentum to the cleanliness drive and intensify the campaign against drugs.

He said that a massive campaign was going on to promote natural agriculture farming in the State and about 50 thousand farmers would be involved in this campaign. He also informed about the successful Janmanch event, an ambitious program of the State Government and the recently held Global Investors' Meet, which was a big success.

The Governor said Himachal was a peaceful State despite being the sensitive region adjoining the neighbouring Union Territory of Jammu and Kashmir, sharing the border with China, high tourist inflow, presence of Tibetan government in exile, tough geographical areas, adverse climatic conditions and the possibility of natural disasters. He stressed on the need for infrastructure, communication system, technology, better civil and police establishments in Kinnaur and Lahaul-Spiti areas of the state, as they are bordering China. He urged that for this the budget allocation needs to be increased suitably. He also stressed on the need for construction of a broad railway line and an international level airstrip in the State to connect Himachal with the strategically important Leh region.

Shri Dattatraya said that the draft of New Education Policy-2019 was a step taken in the right direction. He stressed the balance of spiritual and moral education with materialistic education and values like sympathy, harmony and universal brotherhood should be a part of our education system.