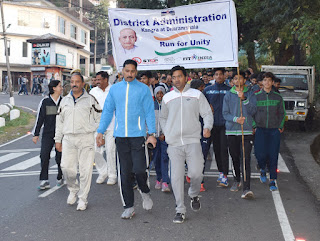 Dharmshala--------large number of Police officials, particularly the youth and school children,  today participated in the 'Run for Unity' which was organized by Kangra Police as a part of programmes to mark the birth anniversary of Sardar Vallabhbhai Patel.

The event held in Dharamshala area has drawn all sections of society & particularly youth from colleges. 'Run for Unity' started from Gandhi Chowk and concluded at Sai Ground Dharamshala.

DC Kangra administered pledge of unity to the participants of the run. SP Kangra said the birth anniversary of Sardar Patel has given all of us an opportunity to reaffirm the inherent strength and resilience of our nation to withstand the actual and potential threats to the unity, integrity and security of our country.