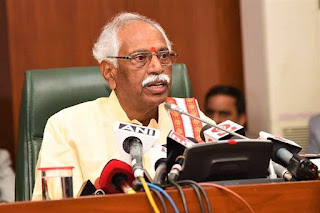 Red Cross is a social campaign working for cause of suffering humanity: Governor

SHIMLA---------- Governor Bandaru Dattatraya said that the Red Cross was a social campaign working for the cause of suffering humanity and it could also be utilised for social campaign like cleanliness and plastic free. He also focused on uplifting the standard of education.

The Governor was speaking during the inaugural function of the district level Red Cross fair organized by District Red Cross Society, Solan at Nalagarh, today. He urged the people to associate themselves with the Red Cross so that humanitarian activities could be undertaken to provide succour to the underprivileged. He said efforts should be made to mobilize resources for gearing up welfare activities and the responsible citizens should associate themselves with the activities of the Red Cross.

Shri Dattatraya expressed his satisfaction that during the period from 1 April, 2018 to 31 March 2019, the district Red Cross Society had provided financial assistance of Rs. 3.54 Lakh to 79 poor and needy patients for medical treatment out of its funds and the society has enrolled 20 life members raising the total life members to 820. While appreciating the efforts of district society, he said that 30 percent share amounting to Rs. 1.23 lakh would be remitted by the society to the state Red Cross society Shimla for the year 2018-19. He added that members of the society were running "Shoolini Prasadam Sewa" near Zonal Hospital Solan for distribution of free meals to the attendants of the patients and said that such should be implemented in other districts also.

Bandaru Dattatraya underlined the need to improve female sex ratio and check female feticide which was a big crime on the society. He said that there should be no discrimination in the name of son and daughter, as girls were ahead in every field of society and also glorifies the name of family and country. He also stressed on natural farming as today water, air and food have become polluted due to the excessive use of chemicals and lauded the efforts of the Solan District Red Cross Society for organizing various programmes with a view to educate and mobilize the people to associate themselves with the movement. He expressed happiness that the district Red Cross Society organised extra activities like arranging special stall for promotion of Indian breed cow, organising drug de-addiction rally, blood donation camp and interactive sessions with students etc. during this fair.

He asked the District Red Cross Society to include cleanliness and plastic-free India in its campaign. He said that the nation was celebrating Gandhi Ji's 150th birth anniversary this year as 'Swachhata Hi Seva' and we should take pledge that along with cleanliness, we would contribute in plastic free campaign.

He honoured the prominent people of the area including Raja Vijender Singh, Subodh Gupta and Rajeev Mehta for their valuable contributions for the society and others for achievements in their respective fields.

Deputy Commissioner and Chairman, District Red Cross Society K.C. Chaman said that district society was involved in humanity works since 1973 and efforts were being made to increase the number of members. He said the Society was also providing ambulance service to the patients in need.

Sub Divisional Magistrate Prashant Deshta proposed a vote of thanks.

Earlier, the Governor flagged off anti-drugs rally and administered oath to the students at Government Degree College, Nalagarh. He said that drugs not only destroy the mind but also intellect. An addicted person becomes a burden on family and society and appealed to the youth not to fall prey of drugs.

He inaugurated the exhibition put up by various departments and stalls of various organizations and blood donation camp organized by Heritage Society. He also distributed medical kits to the people sponsored by Animal Husbandry and Okaya Group.

Bandaru Dattatraya interacted with the students of Bal Vidya Kunj. The Governor appreciated the initiative of district administration and Heritage Society for meeting out education and other expenditures of these children belong to slum dwellers and poor families.