Over 48 thousand youth to be trained for disaster mitigation: CM 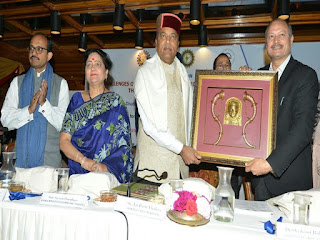 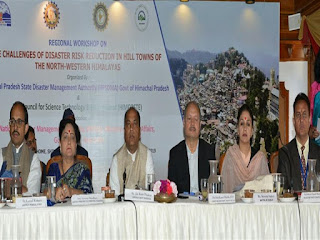 Over 48 thousand youth to be trained for disaster mitigation: CM

SHIMLA-------Effective steps must be taken to build safer and disaster resilient Himachal by developing a holistic, pro-active, multi-disaster, technology driven and community based strategy for disaster management through collective efforts of all government agencies and non-governmental organisations.

This was stated by the Chief Minister Jai Ram Thakur while presiding over the two days regional workshop on "Challenges of Disaster Risk Reduction in Hill Towns" for the stakeholders of Uttrakhand, Jammu and Kashmir, union territory of  Ladakh and Himachal Pradesh, here today. The workshop has being organized by the State Disaster Management Authority (HPSDMA) and HP Council for Science Technology and Environment (HIMCOSTE) in collaboration with the National Disaster Management Authority, Ministry of Home, Government of India.

The Chief Minister said that Himachal Pradesh was  prone to various hazards both natural hazards such as  earthquakes, landslides, flash floods, snow storms and avalanches, draughts etc. and manmade hazards like dam failures, fires, accidents, besides biological, industrial and hazardous chemicals etc. Moreover, the State falls in seismic zone five and was prone to earthquakes and thus houses should be constructed by adopting scientific technologies to make them earthquake resistance. He said that effective steps must be taken to mitigate the same by ensuring effective early warning system. He also expressed concern that people were still occupying the houses which were in bad condition.

Jai Ram Thakur said that a target had been fixed to train as many as 16,130 carpenters to promote construction of safe houses. Besides, a plan had been formulated under the Hospital Safety Scheme to strengthen health services up to community health centre (CHC) level so that effective services could be provided in case of any disaster. A special scheme had been formulated to strengthen lifeline building, he added.

He said that efforts were being made to train the youth for mitigation of disaster. At least ten to fifteen youth would be trained in every gram panchayat and in the first phase 48,390 youth would be trained in rescuing and providing first aid to the victims. He said the SDMA did a commendable service last year by rescuing over 4000 people struck in Chamba, Kullu and Lahaul Spiti districts due to untimely snow by executing operation 'White Himalaya'.

The Chief Minister said that efforts should be made to build a disaster resilient Himachal by capacity building at all levels for preparedness to mitigate and stop occurrence of disasters. The active participation of stakeholders besides political and legal commitment, scientific knowledge, warning system and optimum use of technology was required for mitigation of disaster risks. He said that better coordination between the Centre and State Governments was also vital to lessen the risks of disasters. The State would consider setting up Disaster Mitigation Fund, so that funds could be released for providing immediate  relief to the affected community.

He released a booklet on school safety guidelines and two videos on disaster management and safe construction practices brought out by the SDMA.

Housing, Urban and Town Country Planning Minister Sarveen Chaudhary felt the need to adopt traditional technologies for construction of houses, particularly in the hilly states. She said that the State Government was encouraging construction of houses as per map for which approvals were being given within one. She urged the general public for construction of their buildings as per rules so that losses due to natural calamities could be minimized. She also thanked the Prime Minister for implementing RERA Act in the country.

Chief Secretary Dr Shrikant Baldi said that need was to strengthen the lifeline building such as Secretariat, DC offices, fire stations, police stations, telecommunication network, important bridges and water tanks etc. which would provide immediate relief measures in case of natural calamity. He also felt the need for scientific approach for muck disposable coming out due to road and other infrastructure construction as it leads to landslides and flash floods.

Member, National Disaster Management Authority (NDMA), Union Ministry of Home Affairs, while delivering the keynote address said that development must be carried out in such a way that it does not increase the risk of disaster.  He said that at time one disaster leads to a chain of disasters, therefore steps should be taken immediately to mitigate the disaster risk. He also stressed for setting up State's own Disaster Response Forces, at least for Himalayan States. He said that steps should be taken for improving connectivity and communication network in the State and NGOs should use come forward to develop community disaster management plan up to the village level.

Principal Secretary, Revenue Onkar Sharma said that NDMA had a vital role to play in the Himalayan States as these states were prone to maximum natural disasters. He said that maximum stress has to be laid on taking pro active steps to ensure minimum loss to the lives and properties in case of natural calamities such as earthquake.

Director-cum-Special Secretary, Revenue-Disaster Management D.C. Rana while presenting vote of thanks said that the efforts of the Authority were to create a culture of safety. He said that that the two days workshop would have four technical sessions on hazard vulnerability and risk assessment, improving compliance with building bye-laws in hill towns, disaster mitigation and preparedness and improving disaster response and recovery.