CM inaugurates and lays foundation stones of developmental projects worth over Rs. 209 crore in Bhar 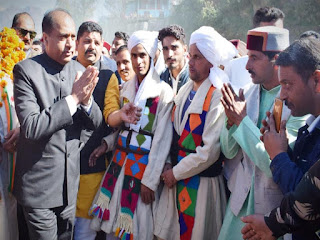 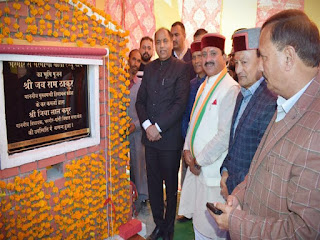 CHAMBA------------29th October will go down as an historic day in the annals of Bharmour-Pangi area of Chamba district as Chief Minister Jai Ram Thakur inaugurated and laid foundation stones of developmental projects worth over Rs. 209 crore in a one day visit to this tribal area of the State.

Earlier, on his arrival at Holi helipad, Chief Minister was accorded rousing reception in traditional attire by the people of the area.

Chief Minister laid foundation stone of 240 MW Kuthed Hydro Electric Project to be constructed at a cost of Rs. 2750 crore. He also laid foundation stones of metaling and tarring works of Dalli to Naha road and construction of Choli to Kawarsi road to be completed by spending Rs. 4 crore and Rs. 5.83 crore respectively. He also inaugurated 15 MW Kawarsi and 9 MW Salun Hydro Electric Projects at village Hiling in Holi constructed at a cost of Rs. 150 crore and 90 crore respectively.

Chief Minister laid foundation stones of 23 roads of the area from PWD Rest House Bharmour to be constructed by spending an amount of Rs. 165.49 crore.

Jai Ram Thakur said that people of the State gave unprecedented mandate to the BJP in the general Lok Sabha elections which shows the faith of the people in the policies and programmes initiated by the Central as well as State Governments for the welfare of the people. He said that the vote percentage was highest in the country and the BJP maintained lead  in all the 68 assembly constituencies of the State. He said that the BJP candidates of Kangra parliamentary constituency also created a history by winning with highest vote percentage in the country.

Chief Minister said that under the dynamic and able leadership of Prime Minister Narendra Modi, India today has emerged as a world power. He said that India was poised to become a five trillion dollar economy in the next few years due to farsighted policies of the Union Government. He said that Union Government has taken several historic decisions which show the strong leadership quality of our Prime Minister.

Chief Minister said that the Union Government had started 'Ayushman Bharat' Yojna to provide free medical treatment up to Rs. five lakh to economically weaker people. He said that over 22 lakh people of the State were covered under this scheme. He said that the State Government had also started Himcare Scheme to provide this facility to all the left out beneficiaries. He said not only this various other schemes like Sahara Yojna, Mukhya Mantri Sewa Sanklap Yojna were also launched by the State Government for the benefit of the people.

Jai Ram Thakur announced opening of IPH Division at Bharmour and IPH Sub Division at Holi, upgradation of Government High Schools Lamu and Bara Gram to government senior secondary schools, opening of PHC at Lech and Primary School in Gram Panchayat Bakan. He also announced plying of Bharmour to Shimla bus via Chandigarh and directed the Deputy Commissioner to explore possibility of constructing helipad near Manimahesh Lake to facilitate the devotees. He also directed the concerned authorities for providing mini buses for Bharmour.