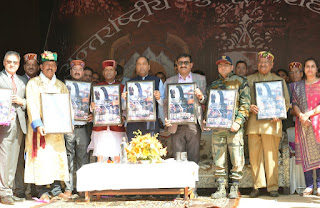 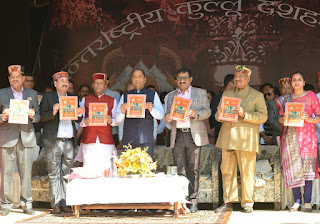 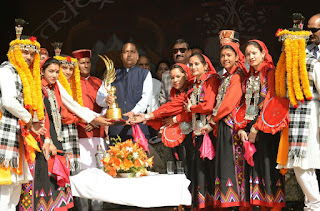 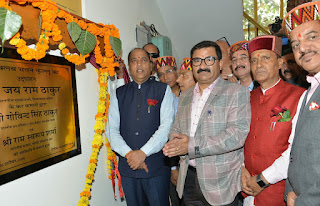 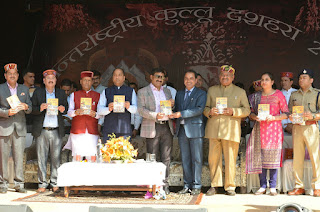 Chief Minister Jai Ram Thakur, while presiding over the concluding ceremony held at Lal Chand Prarthi Kala Kendra, Kullu announced to increase the nazrana (honorarium) of local deities participating in Kullu Dussehra festival by five per cent.  He also announced increase of 25 per cent in distance allowance (Duri Bhatta) given to the deities.

He announced 15 percent increase in remuneration of Bajantaris, who accompany the local deities to the festival besides increasing the amount for celebrating Haripur and Manikaran Dussehra from Rs 75,000 to Rs one lakh and for Vashisht  Dussehra festival from existing Rs 50,000 to Rs. 75,000. He said that the 'Gur' of the Deities would be provided separate amount of Rs 1000.

The Chief Minister said that Himachal Pradesh was known as 'Dev Bhoomi', as the people of the State had great faith in the Deities in almost every occasion and event. He said that the people also deserve appreciation for preserving the rich culture, age-old customs and traditions of the State. He said that in the present era when the whole world has become a global village in real sense, conserving and preserving our age old traditions for the future generations was indeed appreciable.

Jai Ram Thakur said that the Kullu Dussehra provides livelihood to the indigenous community as they provide them a platform to display their products for a much wider audience. This festival was also contributing immensely in promoting tourism in the State with tourists visiting Kullu to watch this cultural extravaganza from world over.

He said that the endeavour of the State government was to add some innovative events to the Kullu Dussehra, but at the same time it was being ensured that age old traditions were kept alive. He said that under Jal Jeevan Mission, launched by Prime Minister Narendra Modi recently, 32 projects had been sanctioned for Kullu district under which Rs 160 crore would be spent. He said that under public works, Rs 38 crore budget outlay had been kept for Kullu Circle. The work on four laning of national highway had been expedited and the stretch between Sundernagar to Manali would be completed within a year.

Jai Ram Thakur said that steps were being taken to ensure time bound completion of Rohtang tunnel and efforts would be made to construct ropeways up to Bijli Maha Dev and Rohtang tunnel.

He said that Prime Minister had taken many historic decisions such as abolishing of Article 370 which was the root cause of the spread of terrorism and anti national activities in the valley. This would open a new era of peace, progress and prosperity in the Jammu Kashmir area and it would develop leap and bound under the dynamic leadership of Prime Minister Narendra Modi.

He distributed prizes to the winners of different events on the occasion and released Souvenir  brought out by the Dussehra Organizing Committee. He also released a poster of documentary 'Gallantry Saga-BRO', released a booklet published by State Language and Art Academy and a souvenir 'Atal Samritian' published by Kullu Sanskriti Vikas Manch.

Forest Minister Govind Singh Thakur, who is also the Chairman of International Dussehra Committee thanked the Chief Minister for envisaging keen interest in conserving the rich 'Dev Sanskriti' of the Kullu valley. He said that this year several innovative steps were taken to make Kullu Dussehra immemorial event. He said that local artists were provided maximum opportunities to show their talent during the cultural nights.

Member of Parliament Ram Swaroop Sharma also shared his views on the occasion.

MLA Sunder Singh Thakur urged the Chief Minister to modify the Lal Chand Prarthi Kala Kendra in such a way that it falls in the category of indoor stadium so that culture programmes could be held here throughout the night, or as was desired by the people.

Former Member of Parliament and Chadibardar of Shri Raghunath Temple Maheshwar Singh also spoke on the occasion. He also apprised the Chief Minister regarding various developmental demands of the area.

Deputy Commissioner and Vice Chairman of the festival committee Dr Richa Verma honoured the Chief Minister and other dignitaries on this occasion. She said that all required steps were taken by the district administration to ensure cleanliness during the Dussehra celebrations. She said that about 331 Deities were invited to participate in the Dussehra out of which 281 Deities graced the occasion.

Earlier, the Chief Minister inaugurated the building of Press Club, Kullu for facilitating the journalists of Kullu district.

While interacting with the media on the occasion, the Chief Minister said that the State Government was committed to maintain cordial relations with the journalists. He said that several facilities were also being provided to the journalists to facilitate them in smooth working.

The Chief Minister said that Media was the fourth pillar of democracy and free and fair press was vital for a strong and vibrant democracy. He said that HP journalist Welfare Scheme was being implemented in the State to provide financial assistance to the accredited journalists at the time of distress.

He announced Rs 10 lakh for construction of boundary wall at the Press Club Kullu.