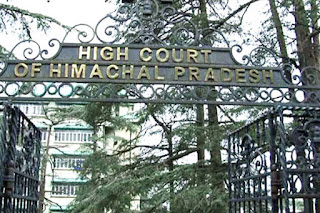 Shimla------The High Court of Himachal Pardesh on Tuesday  has issued notice to the Managing Director, H.P. State Electronics Development Corporation Ltd., Shimla in the matter of alleged corruption in issuance of tender for the purchase of 9700 laptops for free distribution to meritorious students of Class X and Class XII under "Srinivasa Ramajujan Student Digital Yojna".

A Division Bench comprising the Acting Chief Justice Dharam Chand Chaudhary and Justice Jyotsna Rewal Dua, Judge passed these orders on a writ petition filed by Shri Vinay Sharma, Advocate. It has been alleged in the petition that respondent State awarded the tender for 9700 laptops, which are to be distributed among meritorious students of H.P., to two complanies, i.e. Acer India Pvt. Ltd and HP. India Sales Private Ltd., in a wholly unfair, unreasonable, arbitrary and illegal manner by ignoring the bid of Lenovo India Pvt.Ltd. The petitioner has further alleged that in the year 2016, 10,000/- laptops were purchased by the H.P. State Electronics Development Corporation Ltd. for Rs.17.16 crores and in the year same number of laptops were purchased for Rs.17.94 crores, but in the year 2019, 9700 laptops are going to be purchased for Rs.23.20 crores, of same specifications, which smacks corruption in the tender process and which can result into the loss of six crore to the State exchequer. The petitioner has further alleged that Lenovo India Pvt. Ltd. was thrown out of the bid on the ground that its bid does not meet the specification mentioned in the tender despite the fact that State Electronic Development Corporation had purchased the laptops for different department from Lenovo India Pvt. Ltd. only and the same company has supplied the laptops to the respondents two years back being successful bidder and the requirement/specification of the laptops to be supplied were the same. The petitioner has prayed to direct the respondent to quash the aforesaid tender for the purchase of 9700 laptops.