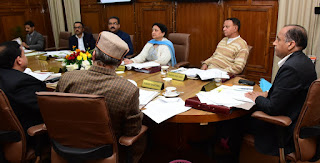 It is the first time that Government has come up with H.P State AYUSH Policy which envisages attractive incentives for prospective investors in AYUSH and Wellness Sector. The important fiscal incentives are Capital subsidy on Ayush Therapy unit at the rate of 25 percent of Fixed Capital Investment with a ceiling of Rs. One crore excluding cost of land, interest subvention of 4 percent on term loan with ceiling of Rs. 15 lakh per annum, Net SGST reimbursement at the rate of 75 percent for seven years, incentives for initiatives in power saving, environmental conservation and for women entrepreneurs, recruitment assistance will be provided in giving employment to Himachali bonafides besides this, lease rental subsidy and rebate on stamp duty will be given to selective investible projects.

It also gave its nod to new IT, ITes and ESDM Policy, 2019 for making Himachal Pradesh as a most favoured investment destination for IT, ITeS and ESDM companies. The policy also envisages building infrastructural support system which can cater to all IT, ITeS and ESDM industry requirements.

In order to create a comprehensive, holistic policy framework to address all aspects of housing for the urban poor including slum rehabilitation and redevelopment and to promote mixed housing development in all new housing projects, the Cabinet gave its nod to the Affordable Housing Policy, 2019.

The Cabinet approved revised guidelines for Tourism Department for issuance of Essentiality Certificates under the provisions of the Rule 38(a)(3) (f) of the HP Tenancy and Land Reforms Rules in cases where a non-agriculturists wishes to purchase land in the State for setting up of tourism units.  The promoter will have to submit Preliminary Project Report of Tourism Project for which the Essentiality Certificate is required to the Director, Tourism, who will assess the land required for the tourism project.

In order to provide ample opportunities of livelihood to the people of rural areas and also preserve the traditional handloom, handicrafts and artisans of the State, the Cabinet approved a new scheme called 'Mukhya Mantri Gram Kaushal Yojna' in the State.  This Yojna will help the youth to upgrade their skills and associate them with traditional skills besides providing them ample opportunity to sell their products.

It also gave its approval to set up statue of former Prime Minister Bharat Ratna Atal Bihari Vajpayee at Shimla and Manali in Kullu district as a mark of respect to his services for the nation.

The Cabinet decided to set up five Integrated Rehabilitation Centre for Addicts in Bilaspur, Solan, Kullu, Shimla and Nurpur in Kangra district for facilitating and treatment of affected people.

To tackle the problem of stray animals, the Cabinet decided to transfer the forest land of Animal Husbandry Department at Mohal Ching Dharmana, Patwar Circle Anti, Tehsil Jubbal in Shimla district in favour of Shrimadbhagwadgeeta Prachar Avam Jan Jagran Sabha, Nankhari in district Shimla for setting up of Gausadan.

It gave its approval to fill up six posts of Extension Officers (Industries) in Industries Department on contract basis.

It gave its nod to open new Fire Sub Station at Jhanduta in Bilaspur district alongwith creation of 23 posts of different categories.

The Cabinet decided to create and fill up three posts of Tehsildar in Public Works Department.

It approved to create new Sub Division of Public Works Department in Haripur, district Kangra to facilitate the people of the area.

It gave its approval to construct additional accommodation in Inspection Hut/Rest House at Dehar in Sundernagar Tehsil of Mandi district.

The Cabinet gave its approval to merge technical staff of H.P. State Education Society in Public Works Department and Irrigation and Public Health Department in one time relaxation in the R&P Rules for the posts of Assistant Engineer, Civil, Junior Engineer, Civil and Junior Draftsman.
It decided to create five posts of different categories in Sub Divisional Election Offices, Indora and Dheera in Kangra district and Sub Divisional Election Office Pangi in Chamba district for smooth functioning of the offices.

It also decided to fill up 13 posts of Election Kanungo in State Election Department through direct recruitment on contract basis.

It gave its nod to establish Project Management Unit under Engineer –in-Chief (Project) for New Development Bank at Mandi by shifting the post of Engineer-in Chief (Project) from Fatehpur in district Kangra alongwith all existing staff and also shifting the Project Management Unit for Himachal Pradesh Rural Water Supply Project alongwith all staff of various categories from Shimla to Mandi for smooth running of the project management unit.

It gave its nod to fill up three posts of Planning Officer in Town and Country Planning Department in relaxation of R& P Rules.

It also gave its nod to fill up nine posts of skilled grafters in Horticulture Department through direct recruitment on contract basis.

The Cabinet gave its approval to fill up four posts of Platoon Commanders in Home Guards and Civil Defence Department.

It also put its seal to increase the stipend of Interns of MBBS/BDS in all government medical/ dental colleges from  Rs. 15000 to Rs. 17000.

It also decided to provide fortified wheat flour to all the ration card holders including NFSA categories (AAY, BPL and Priority Households) to provide added vitamins and minerals  in staples like wheat flour, oil, milk etc. to reduce dietary deficiencies across population groups.

The Cabinet gave its approval to convert all the part timers completing eight years of uninterrupted services on 31 March, 2019 and 30 September, 2019 as daily wagers including part time water carriers in education department.

The Cabinet also gave its nod to increase the income limit for getting employment on compassionate grounds in government sector from Rs. 2.25 lakh to Rs. 2.50 lakh per annum.

The Cabinet gave its approval to fill up 34 posts of different categories in Himachal Pradesh Technical University for smooth functioning of the University.

The Cabinet also mourned the death of Smt. Swarna Devi, mother of Health and Family Welfare Minister Shri Vipin Singh Parmer. It prayed to the Almighty to give peace to the departed soul and strength to the bereaved family members to bear this irreparable loss.