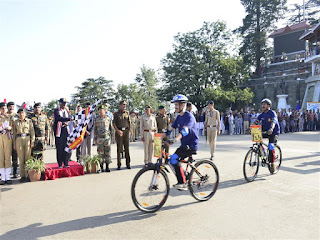 SHIMLA--------------Governor Bandaru Dattatraya today flagged off the Swachhta Pakhwada Cycle Rally organized by National Cadet Corps (NCC) Group, Shimla as part of NCC Directorate, (Punjab, Haryana, Himachal Pradesh and Chandigarh) at historical Ridge Maidan, Shimla, today. The aim of this rally is to generate awareness and importance of swachhta in day to day life of the citizen especially in rural India from where the rally will be passing. Suresh Bhardwaj, Education Minister was also present on the occasion.

On the occasion, the Governor said that Swachhta was a dream project of the Prime Minister, Narendra Modi and Swachhta Pakhwada was one such step towards this, with an objective of bringing a fortnight of intense focus on the issues and practices of swachhta. He added that as per the vision of the PM, "Healthy Body and Healthy Mind", swachhta was an essential pre-requisite for a healthy body and the nation could only progress, if there citizens are healthy and fit. He said that NCC being the largest uniformed youth movement has taken a lead in spreading this message to various sections of the society in different parts of the country through this cycle rally.

Wishing NCC Group Shimla the success of Swachhta Pakhwada Cycle Rally, he hoped that this worthy effort of NCC would prove helpful in spreading awareness towards cleanliness in the society. He said that Himachal Pradesh was also known as Devbhoomi, that is, where the Gods reside. Therefore, people who believed in Gods and Goddesses would be serious about cleanliness because the Gods lives only where there was cleanliness, he added. He said that Himachal was also famous as a tourist destination on the world map. When the place will be neat and clean, it will spread a good message among the tourists and more tourists would come to visit the state, said Shri Dattatraya.

Shri Dattatraya said that NCC cadets have taken a very good initiative. "If we put a habit of staying clean then we can avoid the expense of medicines. If whole of the Himachal is clean, then we can also join the list of clean cities of the country".

Recalling his school days, he said that he has been a cadet of NCC and believes that NCC was the medium to bring discipline and change in the lives of students. He also expressed happiness that a large number of girls were involved in NCC in Himachal Pradesh.

Group Commandant, NCC Headquarter Shimla, Brig. Rajeev Thakur welcomed the Governor on the occasion and said that  NCC was conducting a pan India relay cycle rally from 8th August, 2019 to 27th September, 2019 as part of Swachhta Pakhwada 2019. The cycle rallies have commenced or were commencing from various places in India and will finally converge at New Delhi on 27th September, 2019 and added that the rally was being organized in the form of a relay, wherein 15 cadets would take part in the cycle rally at one point and would keep on changing and handing over the baton to the cadets of next NCC group en route.

Col. Suneet Shankta, Commanding Officer, 7 HP NCC Shimla said that Himachal leg of the rally is starting from Shimla, wherein 30 cadets of Shimla group would cycle in two phases of 15 cadets each up to Chandigarh from where NCC group, Chandigarh would further lake the rally up to New Delhi.