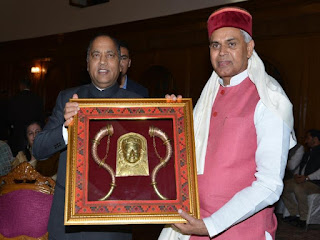 SHIMLA------The Government of Himachal Pradesh hosted State Dinner in honour of Governor Acharya Devvrat who has now been appointed as Governor of Gujarat at Peterhoff here yesterday evening.

Governor Acharya Devvrat while thanking the State Government for this gesture said that he got immense love, affection and support from the people from all walks of life of the State besides full cooperation from the State Government as well as the opposition. He said that during almost four years of his tenure as Governor of Himachal Pradesh, he strived hard to make this 'Devbhoomi' a real abode of gods by launching various social campaigns such as 'Swachhta Abhiyan, Beti Padaoo Beti Bachaoo, Jal Sarankshan etc.

Acharya Devvrat said that his main focus remained to motivate the farmers of the State to go for natural farming as it was only way to double the farm income besides saving them from several diseases due to excessive use of chemical fertilizers. He said that the State Government led by Chief Minister Shri Jai Ram Thakur provided him wholehearted support to make this campaign a success. He said that he would always cherish the memories of his tenure as Governor of the State as Himachal Pradesh was peace loving State with serene atmosphere and good climate.

He said that he would be delighted to visit the State whenever the State and the people require his presence. He also invited people of Himachal Pradesh to visit Gujarat.

Jai Ram Thakur said that the people of the State would never forget the good work and contributions of Acharya Devvrat in the field of natural farming, education and campaign against drug abuse. He assured the Governor that the State Government would ensure that his mission of natural farming would keep going uninterrupted in the State. He also wished a very successful tenure as the Governor of Gujarat.

A colourful cultural programme was also presented on the occasion.