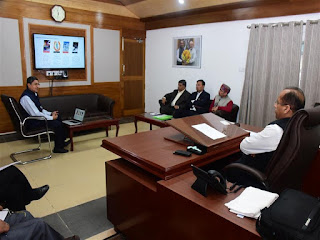 SHIMLA-----Chief Minister Jai Ram Thakur said that the state government is endeavouring to promote tourism in a big way with special emphasis on developing basic infrastructure in virgin tourist destinations. He said that the government would implement each tourism project in a phased manner and the focus would be laid on providing best infrastructural facilities to all age group tourists.

He was speaking during the presentation made by CSRD foundation here today on a comprehensive plan to develop tourism infrastructure in the state.

Jai Ram Thakur said that the government would develop Chanshal for skiing, Bir-Billing for paragliding, Pong Dam for water sports and Janjehli from eco-tourism point of view on priority basis.

The Chief Minister directed to explore the possibilities to develop Riwalsar in Mandi district which is visited by the tourists in a large number especially Hindu, Buddhist and Sikh pilgrims. He also directed to prepare detailed project report for developing Buddhist circuits in the state.

He said that state government has also planned to develop Shiv Dham in Mandi town as an added attraction to the tourists visiting the area. He said ample parking, restaurant and other facilities would be developed to cater to the requirements of tourists of all age groups. The Shiv Dham, which is proposed to be developed on Kangnidhar hill top above Mandi town will be connected with cable car ropeway facility which would also be a mode of transportation for the locals. Moreover, the banks of the Beas river in the Mandi town would also be developed besides an artificial lake.

The Chief Minister asked to explore the possibilities to connecting Kangnidhar with Tarna temple. He said the project to develop Mandi town as tourist destination would be funded by the Asian Development Bank (ADB) however, till the government receives funds, the work on this project would be started through state funds in the first phase.

Directors of the CSRD foundation Hitesh Trivedi, Ojas Hirani and Bharat Patel, senior officers of the tourism department were present on the occasion.