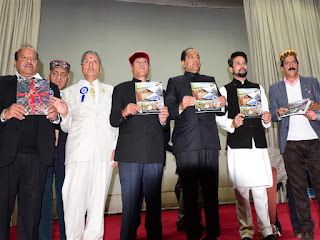 SHIMLA-----The people of Himachal Pradesh throughout the world are known for their honesty, hard work and humbleness and every Himachali living outside the State is the brand ambassador of the State. This was stated by Chief Minister Jai Ram Thakur while addressing the annual function of Himachal Maha Sabha held at Chandigarh today.

The Chief Minister said that the Sabha was doing a commendable service in providing a platform for the Himachali people living in the Tri-city. He said that the Sabha was not only helping in preserving the rich cultural heritage of Himachal outside the State, but also providing help to the people of the State visiting Chandigarh at time of distress.

Jai Ram Thakur said that the State Government has completed over a year in office and this tenure has been dedicated to the welfare of the every section of the society and equitable development of every area of the State. He said that during the very first cabinet of the State Government decided to lower the age limit for getting old age pension without income limit from 80 years to 70 years, thereby benefitting over 1.30 lakh old persons.

The Chief Minister said that the due to the benevolence of Prime Minister Narendra Modi, the State has succeeded in getting developmental schemes worth Rs. 10,500 crore sanctioned from the Centre. He said that today whole world has acknowledged Narendra Modi as world leader and nation was scaling new heights under his able leadership. He said that the surgical strike on Pakistan after the Pulwama attack and thereafter handing over of Wing Commander Abhinandan by the Pakistan army speaks of the strong leadership and Political ability and wisdom of  Shri Modi.

Jai Ram Thakur said that the State Government was open to suggestions from general public for welfare and development of the State. He said that he himself was from a humble background and thus was well aware of  the developmental demands and aspirations of the common man. He urged the   people of Himachal Pradesh living in Chandigarh to come forward with valuable suggestions to ensure that their State forged ahead on the path of progress and prosperity. He said that the State Government would provide all possible help the Himachal Maha Sabha for getting  land for construction of its own appropriate Bhawan for  smooth running of their activities.

The Chief Minister released souvenir of the Sabha on the occasion. He also released 'Asli Waris' a book of story collection s written by Sagar Singh Bhiuria.

He honoured several people of the State living in Chandigarh for excelling in different fields.

President Himachal Maha Sabha Chandigarh Dr. Satish Kumar while welcoming the Chief Minister said the Sabha was leading around 2 lakh people belonging to Himachal Pradesh. He said that the Sabha was working for the last 26 years for the welfare of the people of Himachal Pradesh living in the Tri City. He urged the Chief Minister to take up the matter of allotment of plot to the Sabha for construction of its Bhawan for smooth functioning of the Sabha.