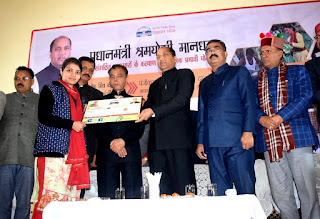 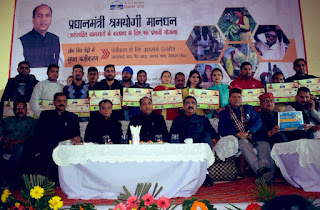 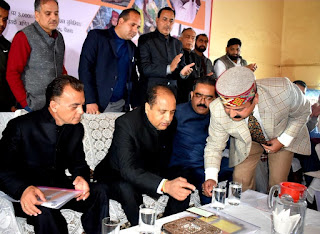 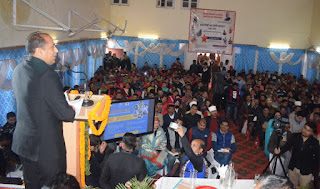 MANDI----Chief Minister launched Pradhan Mantri Shram Yogi Maan-Dhan Yojna for the State from Mandi today, which would provide assured monthly pension of Rs. 3000 to the workers working in the unorganised sector.

Speaking on the occasion, the Chief Minister said that this was a Central sector scheme for unorganized workers whose monthly income was Rs. 15000 or below and have Aadhar umber and Jan Dhan or other bank account. He said that any one between the age group of 18 to 40 year would be covered under the scheme.

The Chief Minister said that it was a voluntary and contributory based scheme under which the subscriber would be paid an assured minimum monthly pension of Rs. 3000 from the age of 60 years onwards. The contribution under the scheme is to the extent of 50 percent by subscriber and 50 percent by the Government of India. He said that the launching of pension scheme for the poor workers working in unorganised sector speaks of the concern of the Prime Minister towards their welfare.

Jai Ram Thakur said that the Pradhan Mantri Shram Yogi Maan-Dhan Yojna would go a long way in providing much needed financial support to the family of the workers. He said that this scheme would cover millions of workers working in the unorganised sector. He directed the officers to ensure that maximum number of workers get registered under the scheme so that they could get benefit of the same.

Jai Ram Thakur said that the nation was safe and secure under the leadership of Prime Minister Narendra Modi. He said that the country gave befitting reply to Pakistan of the Pulwama terrorist attack. He said that due to the diplomatic strategies of the Centre that today Pakistan stands isolated amongst the comity of nations. He urged the people to strengthen the hands of Prime Minister for a strong and vibrant country.

MPP and Power Minister Anil Sharma said that till date the workers working in the unorganised sector were devoid of any pension and with the launch of this pension scheme they would be provided assured monthly income to them.

Member of Parliament Ram Swaroop Sharma said that the scheme would ensure monthly pension of Rs. 3000 after proper registration. He said Prime Minister Narendra Modi has dedicated this scheme for the Nation from Ahmedabad, which shows his concern for welfare of the workers.