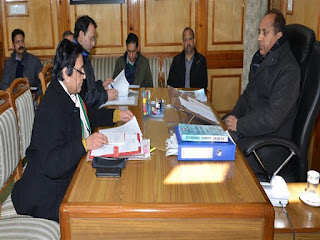 Jai Ram Thakur said that the PWD department must ensure that all the roads leading to essential services such as hospitals be given priority so that the patients does not face any hardship. He said that as many as 25 roads had been adversely affected in the State due to heavy snowfall.

Chief Minister also directed the BSNL authorities to ensure that the BSNL services be restored at the earliest so that the people does not face any inconvenience in communication. He said that as many as 15 Satellite phones would be provided soon at all district headquarters and three tribal subdivisions of the State. This would ensure effective communication facilities at the time of natural calamities, he added.

Chief Secretary B.K. Agarwal suggested to  have 3 Snow cutters to be procured for important points in first Phase and plan be prepared by the PWD department in this regard after assessing ground situation.