Government was also committed for ensuring Skill upgradation of the youth 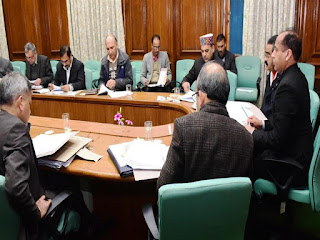 Government was also committed for ensuring Skill upgradation of the youth

SHIMLA-----      A committee would be constituted for better coordination between different departments of the State to ensure effective framing and implementation of various Skill development programmes in the State. This was decided in the meeting 5th meeting of the Board of Directors of the Himachal Pradesh Kaushal Vikas Nigam under the Chairmanship of Chief Minister Jai Ram Thakur .
Chief Minister said that Skill development of the major thrust area and flagship programme of the Prime Minister Narendra Modi and the State Government was also committed for ensuring Skill upgradation of the youth of the State to make them skilled as per the demand of the industry. He said that as many as 65000 youth were to the skilled under the HP Skill Development Project between 2018-2023. He said that as many as 2880 youth were to be trained by providing Training in Vocational Streams. He said that Bachelor of Vocation Programme has been launched in 12 Degree Colleges in the State.

Jai Ram Thakur said that as many as 560 youth have been enrolled under Graduate Add-on Programme introduced in ten degree colleges for final year students. He said that stress should be laid on the fact that all the training programmes were employment oriented. He said that it should also be ensured that the trainees get employment as soon as they complete their training.