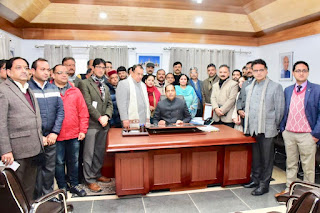 While speaking on the occasion the Chief Minister said that with the launch of seven services, total 59 services were now hosted on e-District Portal and the State government was going to host 136 more services during the next financial year 2019-2020. He said these services would facilitate the people besides lower footfall in government offices.

Jai Ram Thakur also launched availability of two documents through DigiLocker to the people of the State. These two documents are ration card and copy parivar register. These services have been integrated by the IT Department within a period of ten days, in collaboration with the food and civil supplies and panchayati raj department. The citizens of the State can create their DigiLocker account either on internet at http://digilocker.gov.in or on mobile phones by downloading the mobile app for Android and iOS. Once the account is created, Aadhar number is to be linked and the documents can be downloaded by selecting the above departments from the list available in the DigiLocker. There are 18,39,865 ration  cards and 16,91,275 families in the parivar register which have been issued on DigiLocker. Thus, the people of the State can download their ration cards and copies of parivar registers on their mobiles and computers through their DigiLocker accounts.

The Chief Minister also downloaded his ration card and parivar register through the DigiLocker. He applauded the efforts of the departments and expressed his pleasure that the citizens would be benefitted from these services.

Jai Ram Thakur said that all these services would go a long way in providing fast and effective services to the people of the State.