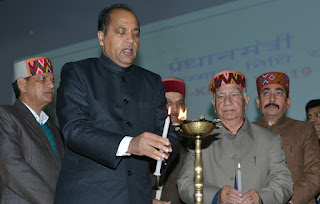 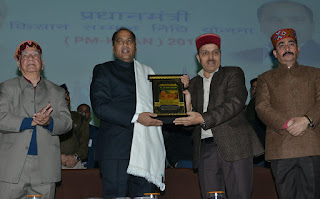 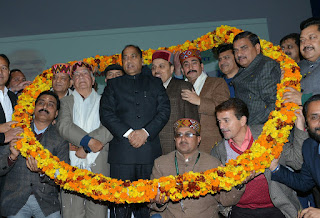 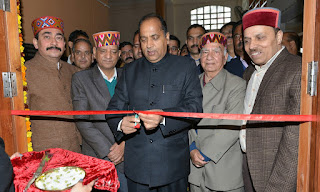 SHIMLA-----While presiding over the State Level function of 'Pardhan Mantri Kisan  Samman Nidhi Yojna' held at Auditorium of Government Degree College Dharamshala today, Chief Minister Jai Ram Thakur said that about 8,42,600 farmers of the State with less than two hectare land would be provided Rs. 6000 annually under this Scheme.

He said that first instalment of Rs. 2000 for the Month of December, 2018 and January and February, 2019 would be deposited in the accounts of        1,41,677 farmers of the State registered till date today itself by the Prime Minister, which was a record in itself. He said that remaining farmers would get this amount as soon as they get registered under this Scheme. He said that this speaks of the commitment of the Union Government for welfare of the farmers.

Jai Ram Thakur said that under this scheme, an income support of Rs. 6,000 per year in three equal instalments were being provided to the families of small and marginal farmers having a combined land holding/ownership of up to two hectares of land. He said that this scheme would be effective retrospectively from 1st December, 2018 for transfer of benefit to eligible beneficiaries. He said that as many as Rs. 12.5 crore farmers of the country would be benefitted by this Scheme.

Chief Minister said that the first instalment for the four month period ending 31st March, 2019 under the scheme was being transferred to the eligible beneficiaries in the current financial year, 2018-19 itself. He said that the State government has decided to provide one more free gas cylinder refill to the beneficiary of Grihini Suvidha Yojna. He said that the Himcare Scheme launched by the State Government was also ensuring health cover of Rs. 5 lakh.

Jai Ram Thakur said that the State government was also prompting Natural farming in the State and for this a provision of Rs. 25 crore had been made in the budget. He said that this would not only ensure handsome income to the farmers but also provide healthy food to the masses.

Former Chief Minister and MP Shanta Kumar said that this scheme launched by the Union Government was a revolutionary scheme, which would provide financial assistance to the farmers to supplement their farm income. He said that no one in the last seventy years had taken such a visionary step as was taken by Prime Minister Narendra Modi. He also thanked the Chief Minister for choosing Kangra district for launch of this scheme in the State.

Food and Civil Supplies Minister Kishan Kapoor while welcoming the Chief Minister said that this scheme would help in providing financial support to the poor farmers, particularly at the time of damage to crops due to natural calamities such as heavy rains, hailstorm, fire etc. He said that the State government has also announced fifty percent subsidy on barbed wire fencing to protect the crops of farmers from wild animals.

Agriculture Minister Dr. Ram Lal Markanda while welcoming the Chief Minister and other dignitaries said that this scheme has been simultaneously launched for the country by Prime Minister Narendra Modi. He also detailed salient feature of this scheme.