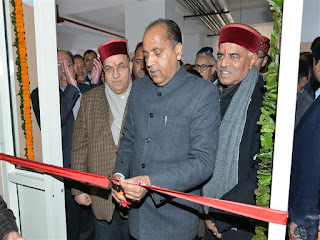 Speaking on the occasion, the Chief Minister said that this building would provide better working conditions to the employees of the Public Works Department (PWD). He said that PWD was the vital department as the people visiting different parts of the State get the idea about the State from the conditions of the roads. The climatic conditions of the State cause wear and tear to the roads thus efforts should be made to construct best quality roads. He said that the State government has constituted a State Monitoring Authority to ensure quality construction of roads, bridges and buildings.

Jai Ram Thakur said that the designs of the building should be in such a way that maximum use of day light could be ensured. The untiring efforts should be made on maintaining of roads so that commuters do not face any inconvenience due to damaged roads. He said that optimum use of central funds must also be ensured for maintaining roads.

He expressed his happiness over construction of this magnificent building in a systematic manner and urged the engineers to replicate this system in other projects also.

Additional Chief Secretary, PWD Manisha Nanda said that the department would ensure that it work with greater dedication to come up to the expectation of the state government.