New PWD and IPH divisions to be opened at Jaswan Pragpur: CM 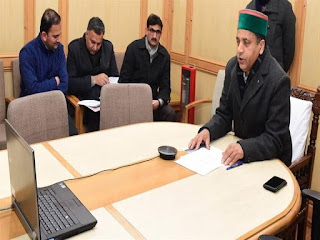 New PWD and IPH divisions to be opened at Jaswan Pragpur: CM

SHIMLA-----New Division of Public Works Department and IPH Division in Jaswan Pragpur and I&PH Sub Division would be opened at Rakkar in Kangra district. This was announced by Chief Minister Jai Ram Thakur today while addressing a public meeting at Kotla Behar in Kangra district through video conferencing from Shimla. Chief Minister was scheduled to have a tour of Jaswan Pragpur Assembly Constituency today, but could not make this due to heavy snowfall at Shimla.

The Chief Minister also announced Fire Station in industrial Area Sansarpur Terrace and upgradation of Government Middle School Kasba Jagir to Government High School. He said that government was ensuring balanced and uniform development of all the areas of the State with special focus on those areas which had remained neglected due to one reason or other.

Jai Ram Thakur said that Sansarpur Terrace was hub of industrial area activities and government was committed to provide all basic amenities in the area for the convenience of the entrepreneurs. He said that government was encouraging only those industrial units which were eco friendly and have immense potential for providing employment and self employment avenues to the youth of the State.

The Chief Minister said that the State Government was fortunate to have benevolence of Prime Minister Shri Narendra Modi who was helping the State by giving approval to ambitious central projects of  Rs. 9500 crore to the State within a period of one year. He said that these projects would further accelerate pace of development in the State.

Earlier, Industries Minister Vikram Singh laid foundation stones of Model ITI at Sansarpur Terrace, Inter State Connectivity bridge at Amroh to be constructed at a cost of Rs. 62 crore and of Government Degree College, Kotla Behar on behalf of the Chief Minister.

Industries Minister thanked the Chief Minister for announcing various projects for the area through video conferencing which shows his concern for the development of the area.