Jan Manch has proved a boon for redressal of public grievances: CM 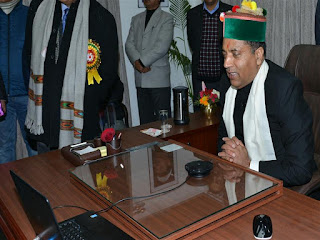 Jan Manch has proved a boon for redressal of public grievances: CM

This was stated by the Chief Minister Jai Ram Thakur while interacting with the people of different parts of the State through video conferencing from Shimla today.

While interacting during the Jan Manch being organized at Jol in Una district where Food and Civil Supplies Minister Kishan Kapoor presided over the function, the Chief Minister said that till date over 20,000 grievances have been redressed through Jan Manch organized in different parts of the State.

The Chief Minister while interacting with the people of Kullu in the Jan Manch organized at Raison, directed the district administration to take effective steps so that the people as well as the tourists do not face inconvenience due to snowfall.

He also interacted with Ministers and people participating in the Jan Manch held at Poanta Sahib in Sirmour district, Bhatiyat in Chamba district, Patta Mehlog in Solan district, Nurpur in Kangra district, Saigalu in Mandi district, Biar in Hamirpur district and Gahanatti in Shimla district.

The App contains information regarding visits, speeches, facebook feeds, twitter etc., various important decisions and steps taken by the government besides biography of the Chief Minister and his personal blog, The another feature of the app is that it allows users to donate in CM Relief Fund and to view details about cabinet ministers of Himachal Pradesh.

He also launched the website jairamthakurbjp.com on the occasion and  released a book on 'Jan Manch' and launched 'Ek Boota Beti Ke Naam' under the Jan Manch programme.