Him Pragati portal emerges as effective platform for online monitoring of projects: CM 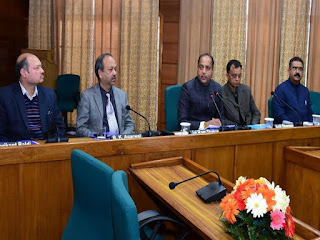 Him Pragati portal emerges as effective platform for online monitoring of projects: CM

SHIMLA----- Effective and regular monitoring of on-going projects is vital for time bound and quality completion of various infrastructural developmental projects being executed by various executing agencies in the State. This was stated by Chief Minister Jai Ram Thakur while reviewing the progress on 'Him Pragati' portal to fast track clearances and approval of various developmental projects. The Him Pragati is an online monitoring system launched by the State government during the month of October last year.

Under the new system all the ongoing projects are being monitored and the investors briefed the Chief Minister about issues being faced by them in getting various clearances and no objection certificates from the concerned authorities. These issues are redressed in the meeting with the Chief Minister giving time bound directions for concerned departments for their approval and according clearances.

Chief Minister said that all these initiatives have been taken to facilitate ease of doing business with direct interface with the entrepreneurs investing in the State. He assured that the entire system is online and the issues raised by the investors would be redressed and monitored regularly. The efforts would be made that not even a single issue raised by the entrepreneurs goes unattended. He expressed hope that such direct monitoring by the State level committee would attract huge investment in the State from all sectors. This system will emerge as focal point and platform for redressal of all the grievances of the entrepreneurs in time bound manner at the highest level.

Jai Ram Thakur said that this portal has been developed to ensure effective online monitoring of various industrial, tourism, power and other infrastructure projects for fast clearance and approval of various developmental projects being implemented in the State. The investors and potential entrepreneurs are now able to know the status of their projects by easily logging on to this portal.

He said that as many as 52 projects, with an investment of over 8690 crore have been uploaded in the Him Pragati portal.  In the first phase, involving estimated investment of Rs. 25 crore or above have been included in the 'Him Pragati' portal. He said that project monitoring unit has been established in H.P. Energy Development Agency (HIMURJA) for implementation of this system. The portal aims at fast tracking of investment and accelerating the process of various clearances and approval from different departments. He said that action on concerns and queries and project developers are also being redressed through this portal.

Jai Ram Thakur said that in addition to this 12 power projects with an investment of Rs 4316.10 crore are also available in the Him Pragati portal for monitoring their execution. He directed the officers to expedite FRA and other clearances so that these projects could be taken in hand soon.

He said that 23 industrial projects with an investment of Rs. 2708.62 crore have been uploaded on the 'Him Pragati' portal to have access of the implementing agencies for raising their various queries for their speedy redressal.

The Chief Minister directed the officers to ensure speedy clearances of various projects in the pipeline. He said that targets fixed for key department such as industry, power and tourism should be achieved with in stipulated time period.

Jai Ram Thakur said that the State has comparative advantage for investment, such as good governess, investor friendly environment, ease of doing business, power surplus State and skilled and talented human resources.  He said that efforts would be made to further simplify procedures for getting various approvals and sanctions.

The Chief Minister said that he himself would monitor the progress on Him Pragati portal quarterly so that pace of development could be accelerated on the projects. The government will also consider inclusion of projects below Rs. 25 crore so that maximum developmental projects are covered for effective monitoring.