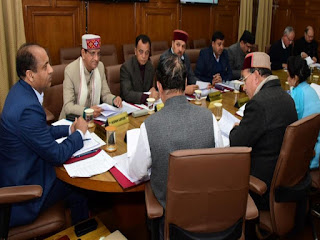 Shimla-----The State Cabinet in its meeting held here today under the chairmanship of Chief Minister Jai Ram Thakur decided to implement compensation scheme for women victims/survivors of sexual assault/other crimes-2018 to provide compensation to the women who had suffered loss, injury, as may be, as a result of the offence committed and thus required rehabilitation.

Under this scheme, amount of compensation would be provided to the victims under Women Victims Compensation Fund as decided by the State Legal Services Authority or District legal Authority. The compensation to the affected women to be provided ranges between Rs. 2 lakh to Rs. 10 lakh keeping the gravity of crime.

The Cabinet decided to create new Division  and Sub-Division of Irrigation and Public Health Department at Chontra in Mandi district along with creation  and filling up of requisite posts.

It gave approval to open one new Sub-Division and one new Section of Irrigation and Public Health Department at Shaat in Kullu district along-with creation and filling up of requisite posts.

It gave its nod to extend the validity period of Letter of Intent (LOI) and licenses BWH-2 and D-2A for setting up of a distillery at village Bhangla, Tehsil Nalagarh, district Solan in favour of M/s Kala Amb Distillery and Brewery Pvt. Ltd.

The Cabinet gave its approval to fill up 28 posts of Junior Office Assistant (IT) in office of Deputy Commissioner, Sirmaur on contract basis.

It decided to fill up four posts of Civil Judges in the establishment of H.P. High Court through direct recruitment from Himachal Pradesh Public Service Commission.

It decided to create and fill up five posts of Associate Professors and one post of Junior Resident in Dr. Yashwant Singh Parmar Government Medical College, Nahan in district Sirmaur for smooth functioning of the college.

The Cabinet decided to fill up 8 posts of various categories in Directorate of Energy through direct recruitment on contract basis.

The Cabinet decided, in principle, to provide 10 percent reservation to the economically weaker sections in the services of the State in Class-I, II, III and IV posts.

It decided to create new Division of Public Works Department at Manali and new Sub-Division of PWD at Babeli in Kullu district by re-oganization of three Divisions under PWD Circle-6 Kullu along-with creation and filling up of various posts of different categories.

The Cabinet put its seal to give guarantee for Rs. 10 crore in favour of Himachal Pradesh State Forest Development Corporation Ltd. to avail Cash Credit Limit at lower rates of interest subject to charge of monthly guarantee fee of 0.5 percent from the Corporation.

The Cabinet decided to constitute the State Compensatory Afforestation Fund Management Authority and creation of Special Fund to be known as State Compensatory Afforestation Fund for compensatory afforestation on degraded forest land/non forest land and Net Present Value (NPV) of the diverted forest land. The Authority will consist of a governing body to be chaired by the Chief Minister and Steering Committee to be headed by the Chief Secretary and Executive Committee to be chaired by Principal Chief Conservator of Forests as Chairperson ex-officio.

It also gave its consent to increase the bed capacity of Civil Hospital, Nerwa in Shimla district from 50 beds to 75 beds alongwith creation and filling up of 46 posts of different categories.

It decided to increase the bed capacity of Civil Hospital, Karsog in Mandi district from 100 to 150 beds alongwith creation and filling up of 11 posts of different categories for the benefit of the people.

The Cabinet gave its consent to fill up 14 posts of Professors, 19 Posts of Associate Professors and 20 posts of Assistant Professors in Pandit Jawahar Lal Nehru Government Medical College, Chamba through direct recruitment from H.P. Public Service Commission on regular basis.

The Cabinet gave its nod to start Automobile Engineering trade in Government Polytechnic, Kullu from next academic session with 60 seats along-with creation and filling up of nine posts of different categories to facilitate the students.

It also gave its nod to introduce trades of electrician and mechanic motor vehicle in Government Industrial Training Institute, Sujanpur Tihra in Hamirpur district from next academic session alongwith creation of 10 posts of various categories.

It also decided to implement District Good Governance Index (DGGI) in all the districts of the State to ensure good governance and evaluate governance trends in every district so that the governance gap if any could be bridged.