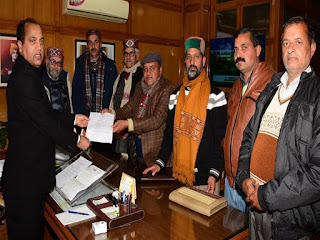 SHIMLA----  The State Government would take appropriate steps to protect the crops of farmers from wild animals and monkey menace besides ensuring effective steps to check forest fires. This was stated by Chief Minister  Jai Ram Thakur while addressing the deputation of Bharatiya Kisan Sangh which called on him here today to apprise him about various issues pertaining the farming community.

The Chief Minister said that the State government was committed to ensure welfare of the farmers and horticulturists. He said that several schemes have been launched to benefit the farmers so that their income could be doubled by the year 2022. He said that the State government has introduced Mukhya Mantri Khet Sanrakshan Yojna under which subsidy of 80 percent was being provided  to group of farmers for installing solar fencing to protect their crops from wild animals. He said that a provision of Rs. 35 crore have been made under this scheme.

Jai Ram Thakur said that a new scheme 'Van Samridhi Jan Samridhi' yojna was aimed at providing training to local people in collection processing and value addition of various forest produces which would supplement in their income.  He said that 'Saur Sinchai Yojna' has been launched in which State would install solar pumps to lift water for irrigation purposes. He said that an amount of Rs. 200 crore would be spent under the scheme in five years.

He said that the State government had declared monkeys as vermin in various parts of the State so that crops of farmers could be protected from monkeys.

Jai Ram Thakur assured the deputation that all their genuine issues would be considered sympathetically and all possible steps would be taken to minimize their grievances.