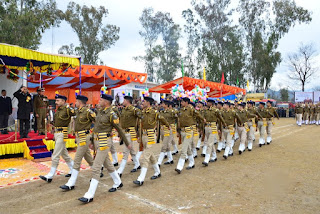 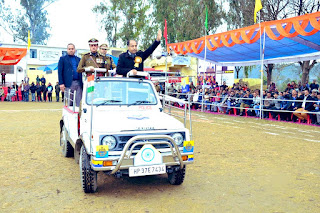 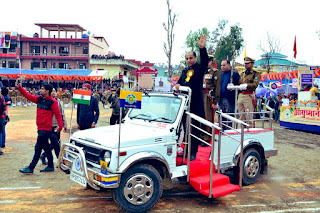 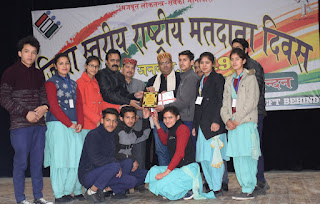 Jai Ram Thakur said that the present State government completed one year in the office on December 27, 2018 and significant efforts were made to provide benefits of developmental schemes to all areas and sections of the State by launching innovative and new schemes. He said that the State was known as Dev Bhoomi and the people of the State were peace loving and hardworking. He said that the present Government was working with a motto of 'Shikhar Ki Aur Himachal' for which cooperation and support of the people was solicited.

Chief Minister said that soon after holding the reins of the State, the State Government took immediate steps towards the upliftment of the weaker sections of the society. He said that in the very first Cabinet, the age limit for getting Social Security Pension was reduced from 80 years to 70 years without any income limit as a matter of respect and honor to the senior citizens which had benefited 1.30 lakh senior citizens at that time. Now about two lakh senior citizens are getting benefit of increased pension of Rs.1300 per month, he added. He said that Gudiya helpline and Shakti Button App were launched for safety of the girls and women.

He said that Prime Minister Narendra Modi graced the function to mark the completion of one year of the State Government held  at Dharamshala. He said that it was for the first time that the Prime Minister not only graced the occasion on oath taking ceremony  of the State Government, but also blessed the people on completion of its one year tenure.

He said that Prime Minister Narendra Modi has also appreciated the efforts of the State government for giving new direction to the development of the State. He said that within a year, developmental projects worth Rs. 9500 crore have been sanctioned from the Centre for important areas like tourism, agriculture-horticulture, irrigation and drinking water conservation etc. Liberal financial assistance has also been received during this period and as a result, the development of the State has gained momentum, he added.

Jai Ram Thakur said that with the aim of redressing the grievances of the people living in far-flung areas of the State at their doorsteps, the State Government launched Jan Manch programme  in the State for redressal of the grievances of common man, particularly those living in rural areas of the State. He said that this programme has become more significant and popular programme of the government, as more than 22 thousand complaints have been resolved in ten rounds of Jan Manch organized in the State.

Chief Minister said that the State Government has also launched Himachal Grihini Suvidha Yojna has been launched to save womenfolk from smoke of kitchen. He said that under this Scheme, free LPG connections were being provided to the families left out from Ujjawala scheme started by the  Central Government. Under this Scheme, free gas connections were provided to 33,264 families with a budget provision of Rs. 12 crore in the first phase. Keeping in view the demand of the needy families, the State Government has released an additional amount of Rs. 10.75 crore to cover more families under the scheme. The target of providing gas connections to all families in the next five months has been set up. With this, Himachal Pradesh will become the first State in the country to achieve this target.

Jai Ram Thakur said that 22 lakh people of the State have been covered under the Pradhan Mantri Jan Arogya Yojana-Ayushman Bharat, the biggest health insurance scheme of the world for getting cashless treatment facilities up to Rs 5 lakh in the hospitals registered under this scheme. Him Care has been started with provision of free treatment upto Rs. 5 lakh per family by the State Government to cover those families which have not been covered under the Ayushman Scheme, he added.

Chief Minister said that it was not possible to provide employment to all, thus the Government has started several skill development schemes in the State to provide necessary training to youth to make them capable to get employment. He said that Mukhya Mantri Swavalamban Yojna has been started with a budget provision of Rs. 80 crores, under which 25 percent subsidy in capital investment along with other concessions are being provided to the youth. Women are entitled for 30 percent subsidy under this scheme, he added. He urged the youth to come forward to avail the benefits of this Scheme.

Jai Ram Thakur said that the State government has also given priority to quality education and health services and the students were being provided qualitative education right from primary education to higher education level. Ten Atal Adarsh Vidya Kendra are being opened in the first phase of the State, in which children would be imparted free education with hostel facilities, he said. He said that 'Medha Protsahan Yojna' has been started with a budget provision of Rs. 5 crore to provide coaching to meritorious needy students for various competitive examinations after higher secondary and graduation. As many as 500 students will be provided with the assistance of Rs. 1 lakh per students for coaching, he added.

Jai Ram Thakur said that Tourism and hydro-power can play a big role in making Himachal a self-reliant state and effective steps were being taken to attract investors in both these areas and developing infrastructure facilities. He said that a new scheme called 'Nai Rahein, Nai Manzilein' with a budget provision of Rs. 50 crore has been started to develop the beautifull unexplored places of the State. In the first phase, Janjehli, Chanshal and Bir-Billing were being developed as attractive tourist destinations, he added. He said that with  a view to develop tourism infrastructure in the State, particularly in rural areas, an ambitious project of Rs.1892 crore has been proposed for funding to Asian Development Bank.

Chief Minister said that the present government has envisioned to connect every village with the road and 'Pradhan Mantri Gram Sadak Yojana' has proved a boon in this direction. He said that about Rs. 1229 crore have been sanctioned under Pradhan Mantri Gram Sadak Yojna under which 399 roads and 13 bridges would be constructed during the year. He said that with the construction of 69 new national highways approved by the Central Government, the state would definitely usher in a new era of socio-economic transformation.

He said that an annual plan of Rs. 7100 crore has been proposed for the coming financial year, which is Rs. 800 crore higher as compared to the current financial year plan.he said that the State Government  has taken a decision in principle to implement 10 percent reservation for the economically weaker sections of the general category in the government jobs in the larger interest of the society. This decision would not adversely affect the interests of any other sections availing the reservation facility in the state, he added.

Earlier, the Chief Minister hoisted the National Flag and took salute from the impressive march past by contingents of Police, Home-guards, NCC cadets, NSS Cadets, Scouts and Guides and school Children.

He also planted a sapling of 'Arjun Tree' on the occasion under the 'Ek Boota Beti Ke Naam' at HPPWD Rest House Kunihar and also started 'Ann Prashan' under Poshan Abhiyan and Signature Campaign under Beti Padhao Beti Bachao' programme.

Tableaux and exhibitions highlighting achievements of various departments and Police Band was the attraction of the event.

Later the Chief Minister was at Home with the eminent people of the area at Government Boys Senior Secondary School Kunihar today.