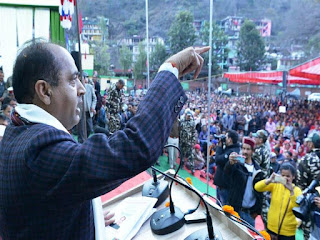 SHIMLA----Chief Minister Shri Jai Ram Thakur announced to open Tehsil Welfare Office at Balichowki in Seraj Assembly constituency of Mandi district to benefit the people of the area. He made this announcement while addressing a public meeting at Balichowki, after laying foundation stone of "Balichowki and multi village group water supply scheme" for Seraj block under BRICS to be completed at a cost of Rs 41.37 crores.

Jai Ram Thakur formally inaugurated Block Development Officer (BDO) office, Balichowki on the occasion. He said that with the opening of BDO office at Balichowki, a long pending demand of the area has been fulfilled which would benefit people of 34 Panchayats of this area. He said that before opening of this office, people had to travel up to Janjehli for their various works.

He announced that a helipad would also be constructed at Balichowki.

The Chief Minister laid foundation stone of flood protection work at    Balichowki to be completely by spending an amount of Rs. 5.50 crores.

Gram Panchayat Pradhans of as many as 34 Gram Panchayats of Balichowki Block and Members of Shakti Kendra honoured the Chief Minister on the occasion.

Speaking on the occasion, Irrigation and Public Health Minister Mahender Singh Thakur said that the people of the area were fortunate to have Jai Ram Thakur as the Chief Minister of the state. It was due to the efforts of the Chief Minister that the state had succeeded in getting Rs. 4892 crore flood protection project sanctioned from the Centre for Channelisation of various rivers of the state.

Several prominent Congress leaders joined the BJP on the occasion.

HPMC Vice Chairman Ram Singh, State BJP Spokesman Ajay Rana and Yuvraj Bodh were present on the occasion among others.