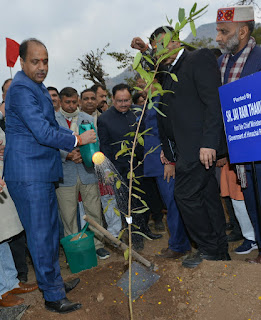 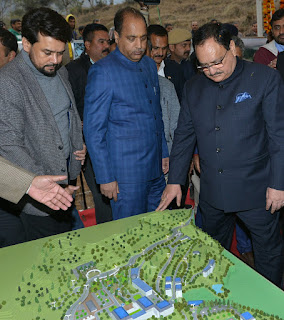 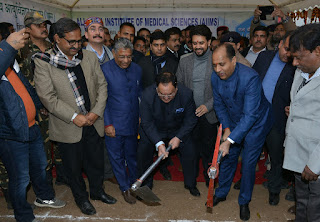 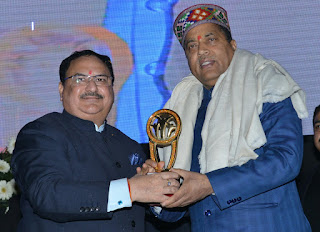 Speaking on the occasion, Jai Ram Thakur said that the AIIMS would prove a boon for the people of the State, as they would have access to the word class specialised health care facilities nearer to their homes. He said that this Rs. 1351 crore AIIMS would be completed within a period of two years and would have bed capacity of 750 beds, out of which 300 beds would be for super speciality.  He said there would be 100 MBBS seats and 60 nursing seats in the institute.

He said that due to unnecessary delay in transferring the land for this institution by the pervious State Government, people of the State were deprived of specialised health services. The present State Government has not only ensured transfer of land immediately, but also provided all possible help by way of providing additional land of 48 hectare so that this premier institute could take off at the earliest.

The Chief Minister said that it was due to the benevolence of the Prime Minister Narendra Modi that the Centre Government sanctioned AIIMS, Satellite Centre of PGI, four medical colleges, IIIT and IIM etc. for the State. In addition, the State also succeeded in getting projects worth Rs. 9500 crore approved from the Centre.

Jai Ram Thakur said that it was vital that this pace of development goes on uninterrupted for which unconditional support of the people of the State to the Prime Minister was highly solicited. He said that the people want Shri Modi to head the nation for coming several years.

Union Health Minister Jagat Prakash Nadda said that the AIIMS was being constructed under the Pradhan Mantri Swasthya Suraksha Yojna. It would serve the dual purpose of providing super speciality health care to the population, besides creating a pool of doctors and other health workers for providing better health care facilities to the people of the State. He said that the institute would also have Affordable Medicine and Reliable Implants for Treatment (AMRIT) outlets and Jan Aushadhi Kendra where medicine would be provided at highly discounted rates to the poor and needy.

Shri Nadda said that the project would be executed by NBCC Ltd. and would have 15 operation theatres and 20 speciality and super speciality departments.  In addition, it would also have an AYUSH Department with 30 beds for providing treatment facilities in traditional system of medicine. He said that 14 AIIMS were sanctioned for different States by the Union Government and Himachal Pradesh was fortunate to get one of the premier institution.

Union Health Minister and Chief Minister also planted saplings in the premises of the proposed site on the occasion.

Health and Family Welfare Minister Vipin Singh Parmar said the State has achieved new heights in matter of development since the present State Government led by Chief Minister Jai Ram Thakur took the reins of the State. He said that three hundred  doctors have been appointed  in the State during the last one year to ensure that people of the State does not suffer due to want of doctors.

Member of Parliament Anurag Thakur said that although this project was sanctioned way back in 2014, but it could take off only in 2019 as the previous State Government did not even provide adequate land for this institution. He said that this would not only provide better healthcare facilities to the people of the State, but also provide ample opportunities of employment and self employment to the youth of the region.

Joint Secretary, Health Sunil Sharma gave a presentation on construction of AIIMS on the occasion.