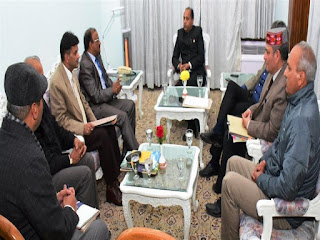 SHIMLA----Himachal Chief Minister Jai Ram Thakur has urged Union government to bring Himachal Pradesh under regional office, Chandigarh instead of Regional office Dehradun so that the state could get FCA clearances with more convenience for developmental projects.

He was presiding over the meeting with senior officers of the Ministry of Environment, Forest and Climate Change led by Director General of Forests and Special Secretary of the Ministry Siddhanta Dass, here today.

Shri Thakur also urged for extending the limit of giving approval for FCA clearances up to one hectare vested with the state government. This limit should be extended to ten hectares from the existing one hectare so that the pace of development could be expedited.

Jai Ram Thakur said that monkey had been declared as vermin in about 38 Tehsils and Sub-Tehsils of the state but the monkey menace was still continuing in most parts. He urged the Union government to declare monkey as vermin in 53 more Tehsils and Sub-Tehsils of the state so that farmers could take sigh of relief from the monkey menace.

He also urged the Ministry to exempt the land coming under the wires of the ropeways from FCA as it would go a long way in facilitating the tourists and people of the state.