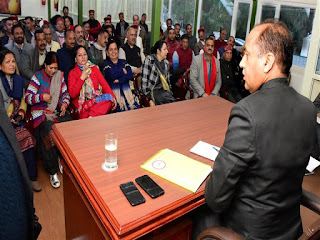 SHIMLA----All the party functionaries and officer bearers need to work with greater co-ordination to ensure that the welfare policies and programmes initiated by the state government reaches the person living at the lowest ebb.

He was addressing the office bearers of BJP Mandal Solan here today. This was the fourth Mandal which participated in the Mandal Milan programme launched by the state government for effective dialogue between the party functionaries and the government.

The Chief Minister said that since the 14th Finance Commission has provided liberal financial assistance to the Panchayati Raj Institutions, they must ensure that the funds allocated for the development of respective panchayats were utilized properly and effectively.

Jai Ram Thakur said that regular meetings must be held at the Mandal level to ensure better coordination between the party functionaries. He also stressed the need to create better rapport between the general public so that they could be motivated to support the party. He said that party functionaries should also try to woo new members to join the party to further strengthen it at the grass root level.