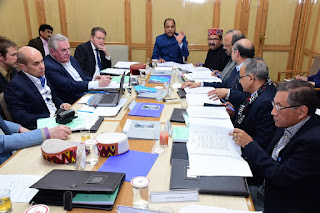 SHIMLA----    The State Cabinet meeting held here today under the Chairmanship of Chief Minister Jai Ram Thakur decided to select Confederation of Indian Industry (CII) as national partner for the proposed 'Himachal Pradesh Investors Summit-2019' to promote investment in the State being organized on 10-11 June, 2019 at Dharamshala in Kangra district. The CII would render necessary help, support and service for organizing this event successfully.

It decided to create Ropeway and Rapid Transport System Development Corporation in the State under the control of Transport Department to oversee the implementation of all the ropeways and Mass Rapid Transportation System project and also to take up projects of PPP/BOT/EPC mode.

The Cabinet also gave its nod to make necessary amendment in H.P. Protection of Interests of Depositors (in Financial Establishments) Act, 1999 for removing certain infirmities in the existing legislation and to make more deterrent and effective.

To tackle the problem of drug abuse particularly among the youth, it was decided to bring Narcotics Drugs and Psychotropic Substances (Himachal Pradesh Amendment Bill), 2018 to make the offences related to drug abuse more stringent.

It gave approval to the guidelines for displaying 'Gram Gaurav Patt' in their respective Gram Panchayats to those persons who have contributed a lot for Nation/State or their respective areas.

The Cabinet approved creation of the Project Management Unit at Irrigation and Public Health Headquarter, Shimla along-with creation of 25 posts of various categories.

It gave its consent   in principle to outsource 2322 employees from outsourcing agency to man 517 drinking water and irrigations schemes of Irrigation and Public Health Department.

The decision was made to purchase 13 Bolero vehicles one each for every police district of the State under national Emergency Response System for tackling the emergent situations.

The Cabinet decided to opening of liquor sub vends L-2/L-14 at 59 locations in the State on national highways keeping in view the judgement of Hon'ble Supreme Court.

It gave its nod to fill up six vacant posts of Panchayat Inspectors through direct recruitment on contract basis in Panchayat Raj Department.