CM stresses for close coordination between government and organization 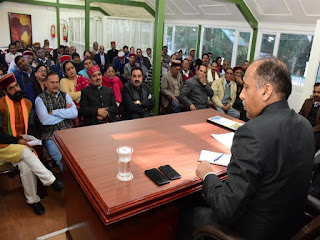 CM stresses for close coordination between government and organization


Vijyender Sharma
SHIMLA---       Chief Minister Jai Ram Thakur while addressing the Mandal Milan of the Arki Assembly constituency of Solan district at his official residence here, emphasized the need to work with the coordination between the government and the Mandal so that the policies and programmes of the state government can reach the people and more and more people can get benefited by these policies and programmes.

Jai Ram Thakur said that the State Government is committed to the welfare of all sections of the society especially the weaker sections and during the ten month tenure, the government has initiated many schemes and programs for the welfare and development of society at whole. He said that it is the responsibility of the Mandal to make the general public aware about policies and programmes so that more and more people can get benefitted. He said that developmental activities in the area should be reviewed from time to time and if there is any shortage, then it should be brought to the notice of the concerned officers and to the government so that it could be removed.

The Chief Minister said that the state government has lowered the age limit of age old age pension from 80 years to 70 years without any income criteria in the very first cabinet meeting, which has benefited thousands of elderly people of the state. He said that to provide Smoke-free kitchen for women, the Himachal Grihini Suvidha Yojana besides the Chief Minister Swavlamban Yojana had been started to benefit the youth. He called the office bearers of the Mandal to work with more dedication so that more people can be made aware about various developmental schemes of the state government and the central government.

The members of Arki BJP Mandal honored the Chief Minister with sword and a flower bouquet.