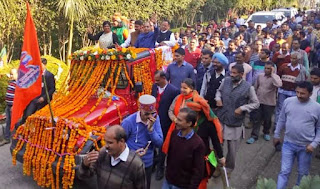 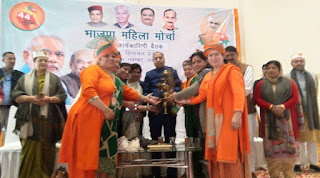 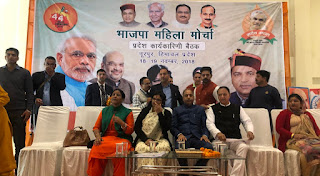 He said said that in addition to this the State Government has also launched several schemes for the welfare and empowerment of the women. He said that schemes like Mukhiya Mantri Grihini Suvidha Yojna, Beti Hai Anmol Yojna and Sashakt Mahila Yojna were aimed at improving the condition of womenfolk in the State. He said that over 1.30 lakh free gas connections would be provided in the State under Grihini Suvidha Yojna and Himachal would soon become first smoke free State of the country with every kitchen having a gas connection.

Jai Ram Thakur said that the menace of drugs was a serious threat to the society which needed to be curbed by initiating joint efforts. The State Government has launched a massive campaign to tackle this social evil and it was on his initiative the meeting of Chief Ministers of four states was held at Chandigarh to chalk out a joint strategy to fight against it. He said that the role of women was also vital to check this menace so that a drug free society could be created. He also urged the Mahila Morcha to come forward to check this vice for larger interests of the society.

Jai Ram Thakur said that due to negative politics played by the previous State Government and lack of interest in development of the State, several ambitious projects were hanging in fire. The previous State Government even failed to prepare DPRs for over 68 National Highways sanctioned by the Union Government for the State. He said that the State was fortunate to have blessings and love of Prime Minister Narendra Modi which was giving big boost to the development of the State.

Earlier, the Chief Minister laid foundation stone of Interstate Bus stand at Jassur to be constructed at a cost of Rs 7.50 crore. This Bus stand would have three storey commercial complex and six ticket counters and other civic amenities.

The Chief Minister announced upgradation of PHC Khariyan to CHC and Rs. 5 crore for Finna Singh Project. He also assured that matter of declaring Police District for Nurpur would be considered sympathetically.

He also laid foundation stone of various water supply schemes from Chikki Khad for left out population of Nurpur Block to be completed at a cost of Rs. 39.24 crore. This Scheme would benefit over 32,000 people of the region.

BJP National Mahila Morcha President and Chairperson Social Welfare Board Maharashtra Vijay Rahatkar said that the nation today was celebrating the 190th birth anniversary of Rani Jhansi. She said that the bike rally were also being organised in two hundred places throughout the country to mark the occasion. She said that Prime Minister Narendra Modi has initiated several schemes for welfare of the women and seven crore toilets have been constructed in the country under the Swachh Bharat Abhiyan which have particularly benefited crores of women in the country. She said that under Pradhan Mantri Ujjwala Yojana, crores of women have been benefitted as they were provided free gas connections thereby providing them freedom from smoke and cumbersome chore of fuel food collection. She also thanked the Chief Minister for launching several schemes for welfare and empowerment of the women in the State.