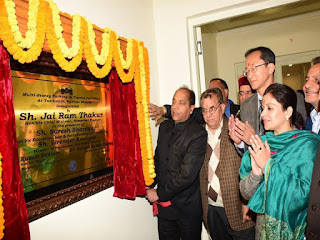 SHIMLA-----Chief Minister Jai Ram Thakur dedicated two mega projects worth about Rs. 90 crores to the people of the state in general and Shimla town in particular on Thursday. These projects include Rs. 82 crore car parking at Tutikandi near ISBT, Shimla and Rs. 8 crore renovated town hall at the Mall.

The thirteen storied car parking will have facility to park about 850 small vehicles besides four buses. The basic amenities would also be made available to facilitate the general public.

While addressing the media and others after the inauguration of car parking, the Chief Minister said that this parking would go a long way in decongesting the flow of tourist vehicles to Shimla town. He said that this parking complex was probably one of the biggest projects in Shimla town. He said that tourists all over the country and world visit Shimla, but they used to face lot of inconvenience for parking their vehicle.

Jai Ram Thakur said tourism development was the top priority of the state government for which all possible efforts would be made for external funding. He said that major thrust would be laid on developing unexplored and virgin areas from tourism point of view.

He said that the Town Hall, Shimla was another ambitious project which was today dedicated to the people of the state. Apart from historic Gaiety Theatre, the Town Hall building was another USP of the town. He said that Rs. 26 crore project with ADB assistance has also been implemented for renovation of Bantony Castle.

Jai Ram Thakur said that the government was adopting policy of zero tolerance against corruption and no compromise would be made in quality of construction in various developmental projects. It was with this objective that the Quality Control Cell has been established in the Chief Minister's Office.

He felicitated the Country Director of ADB Kenichi Yokoyama and other member of ADB on the occasion.

Education Minister Suresh Bhardwaj said that these two projects dedicated today would go a long way in promoting the tourism activities in the state. He said that the Town Hall was the historic and monumental building of the town which has been renovated by maintaining the old design and architect. He said that all these projects dedicated today were got sanctioned by state government headed the then Chief Minister Prem Kumar Dhumal.

Kenichi Yokoyama also appreciated the efforts of the state government in completing this project in a stipulated time period. He said that the car parking facility would prove a boon for the tourists and general public as the long pending demand has been fulfilled.

Additional Chief Secretary, Tourism Ram Subhag Singh said that it was a historic day for the people of the Shimla town as the two mega projects worth about Rs. 90 crore have been dedicated by the Chief Minister.

Project Director, ADB Parveen Gupta presented the vote of thanks.