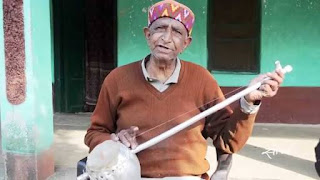 SHIMLA-----Chief Minister Jai Ram Thakur has condoled the demise of popular folk singer and poet Pratap Chand Sharma, who passed away today at the age of 90 at his native village Naleti in Dehra constituency of Kangra District.

Jai Ram Thakur said that Pratap Chand Sharma contributed a lot to promote the traditional folk music of the state for which he would be remembered for a long time.

In his condolence message, the Chief Minister expressed his sympathies with the bereaved family members and prayed to the Almighty to give peace to the departed soul.

The Governor said Pratap Chand Sharma contributed a lot to popularise the Himachali folk and would remain a source of inspiration to the young artistes.

He prayed to the Almighty to give peace to the departed soul.