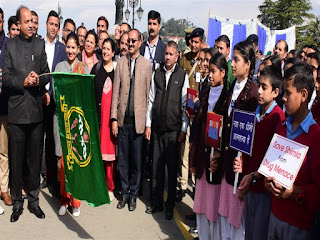 SHIMLA----Chief Minister Jai Ram Thakur flagged off an anti drug rally of school students from the Ridge today, organized by the Press Club Shimla. Presiding over the programme the Chief Minister emphasized on the role of children in the fight against drug abuse. He said that children can give new strength to the anti drug campaign because their role in the society is vital. Jai Ram Thakur said that if children restrain, only then it's possible to uproot the evil of drug abuse. The lesson of social obligation cannot be taught in the classroom only, but by joining such events children work as messengers among the society. To make this campaign successful one has to work with utmost diligence and success is possible only when it is joined by each and every section of the society.

The Chief Minister said that drug abuse is a matter of serious concern not only to the state of Himachal Pradesh but to the nation, as well as the entire world. State government is discharging its obligation. Though enough laws are in force to prevent drug peddling and if needed, the law would be made more stringent. But just by making laws, the problem is not going to be solved. First of all, it is extremely important to spread the awareness among masses about this social evil. The positive results of government policies cannot be seen until people participate actively and cooperate in implementation. Jai Ram Thakur said that the state government is focusing only on its work, regardless of the consequences.

The Chief Minister lauded the endeavours of Press Club Shimla in the social sector and said that from time to time the Club had organised programs that have social concerns. Many programs such as anti drugs campaign, cleanliness drive, blood donation camps and sports events were organized by the club. He said that it becomes our moral obligation that we shall contribute to stop the danger for the next generation. In the cleanliness drive also the Press Club had played an important role, which he hoped will continue in the coming time too. He said that media can give real momentum to any campaign through their effective writings and wide coverage.