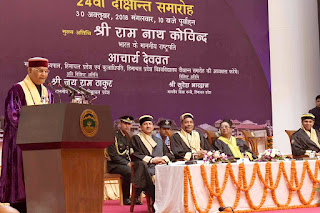 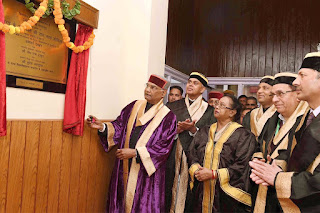 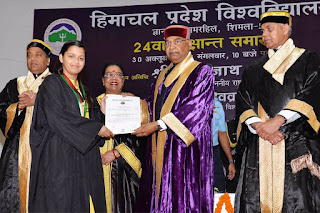 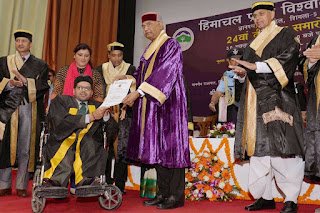 SHIMLA---President of India Ramnath Kovind was the chief guest in the 24th convocation ceremony of Himachal Pradesh University, Shimla held today. He also awarded gold medals to eleven meritorious students of the University.

As many as 230 gold medals and 180 PhD degrees were awarded to meritorious students on the occasion.

Presiding over the function, Governor Acharya Devvrat said that India remained 'Vishva Guru' in the field of education, where students from all over the world used to come for studying in renowned educational centres like Nalanda and Takshsheela. The main focus in education during that era was on creating good character along-with knowledge of words so that any person did not find it difficult to get success due to adverse conditions or challenges.

Expressing concern over the declining moral values in the present society, the Governor said that if teachers, police and politicians work with more honestly and dedication, the reform could be brought in the society for sure.

While congratulating the degree holders and their parents, he said that the concept of convocation was not new for us. In past too, the teacher or Guru after completion of education would ask his disciple to work for sake of humanity and society with commitment and honesty. He urged the medal and degree holders to give due respect to parents and teachers who had a great contribution in their lives.  He called on the teachers to give idealistic thinking to their students besides emphasizing on nationality and quality of life.

Later, the Governor awarded degrees to the 180 students on the occasion.

He said that the Himachal Pradesh University was the premier university of the country which has produced several alumni who have excelled in different fields and contributing towards development of the nation. He urged the students to respect their teachers and parents as they have a major role in whatever they have achieved in their lives.

The Chief Minister while nostalgically remembering his student days recollected that he had performed in a one-act play in the same auditorium of this university. He said that one must remain as learner throughout his life only then can he progress ahead. He said that the menace of drug abuse was emerging as a threat to the society. He urged the youth to come forward to nip this evil in the bud so that the society could be made drug-free.

Vice Chancellor, Himachal Pradesh University Prof. Sikander  Kumar welcomed the President, the Governor, the Chief Minister, Ministers and other dignitaries present on the occasion. He said that it was an historic day for the University as President of India graced the 24th convocation ceremony. He also detailed brief history of the university.